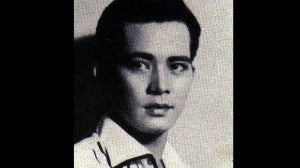 LUIS Gonzales was a big star of Sampaguita Pictures in the 1950s and 1960s, when he was the screen consort of the beauteous Gloria Romero, the reigning Queen of Philippine Movies in the post-World War II era.

Together, they replicated the pre-war love team of Carmen Rosales and Rogelio dela Rosa in such post-war remakes as “Ang Tangi Kong Pag-ibig,” “Colegiala,” and “Pagdating ng Takip-Silim.”

Gonzales was also a leading man to all the Sampaguita female stars who later became Famas Best Actress awardees, like Paraluman, Lolita Rodriguez, Rita Gomez, Marlene Dauden, Barbara Perez, Amalia Fuentes, Susan Roces, Nora Aunor and Vilma Santos. He himself was nominated by the Famas for Best Actor, but not once did he win the coveted trophy.

The actor was also nominated by the Famas for his portrayal of the late president, Ferdinand Marcos, in 1965’s “Iginuhit ng Tadhana.” But, the award was won instead by Robert Arevalo, for “Daigdig Ng Mga Api.” Both films figured prominently in the presidential election campaign that year.

A very prolific actor, at Sampaguita Pictures studio alone, he made over 100 films.

“I trusted Doctor Perez so much that I never refused any role that he asked me to do,” he told me once.

“Pancho Magalona liked my style of dancing, and he introduced me to Doc Perez. We shook hands, and Doc told me to go to Sampaguita to have a screen test. I wasn’t keen on it, because I was busy with school and my job as a working student. It took me two weeks to make up my mind.

“Director Armando Garces supervised my screen test. He made me do some acting, first as a ‘bida’ or hero, then as a ‘kontrabida’ or villain.”

After passing the test, he had to sign a “build-up” contract and was given a weekly allowance for him to spend for transportation and gym training. He was also advised to take up speech lessons.

When he reported for work after three months, he was introduced to Lolita Rodriguez, who was going to be his partner, playing second lead in “Pilya.” The major players in the film were Gloria Romero and Ric Rodrigo.

It took some time before he was finally paired with his dream girl, Gloria Romero, in “Despatsadora.”

One day, he found himself on the set of a dramatic scene between Carmen Rosales and Van de Leon, where he had to emote for “Luha ng Birhen.” He must have created a good impression, because his next assignment was as Norma Vales’ partner in 1955’s “Ang Tangi Kong Pagibig.”

When Romero became the leading lady of Dela Rosa in “Artista,” Gonzales began to feel that he would never graduate from second-lead roles. Then came “Bulaklak sa Parang,” where Luis, Lolita Rodriguez and Pancho Magalona figured in a love triangle. Challenged by two of the studio’s best dramatic thespians, in a story directed by the Dean of Sampaguita directors, Octavio Silos, Luis won the right to star opposite his idol, Gloria Romero, in “Despatsadora.”

Luis left Sampaguita Pictures in 1969, when Doc Perez gave him permission to freelance after the expiration of his third contract. Though no longer under contract, he still made movies for Sampaguita from time to time, until the movie studio made its last film, “Goriong Butete,” in 1981.