‘Cave’ recalls Thai soccer team rescue – with those actually there 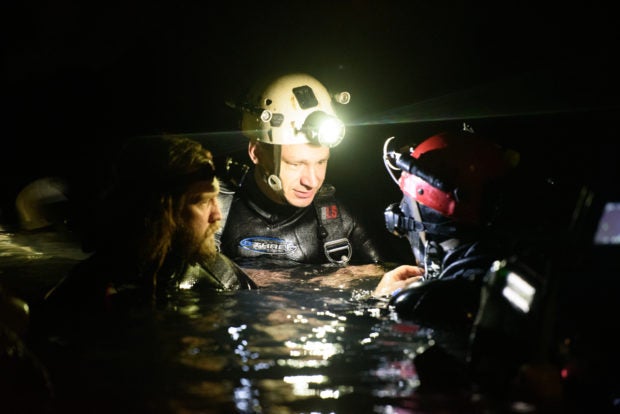 BUSAN — “The Cave” debuted at the Busan International Film Festival on Oct. 5, becoming the first feature film released to portray the awe-inspiring events that had taken place just some 15 months prior in Chiang Rai, Thailand.

The world watched on and was ultimately uplifted by the story of a soccer team of a dozen teenage boys and their 25-year-old coach surviving in a flooded cave for 18 days, before all were rescued alive and well through a complicated scuba relay extraction.

“Usually with my movies, no one really cares about the film that I’m working on or the project that I’m making,” said Thai and Irish director Tom Waller, a veteran producer and liaison between Hollywood and Thailand, speaking with The Korea Herald just after the film’s worldwide premiere.

“This was like a completely different experience,” he continued. “There’s so many people who watched this on the news and absorbed this story through newspapers and media, that everyone thinks they know the story already.”

The film actually spends little time on the team in the cave — “We know they survived. That’s for somebody else to tell that story,” Waller said.

Within minutes of the film rolling, the team has finished practice and gone off to explore the nearby cave together. A couple of quick cuts later and the audience sees rain pouring down from the outside and the boys fumbling with flashlights inside. Blink a few times and text scrolls across the bottom that it’s Day 3 of their being trapped.

“The Cave” moves at a blistering fast pace from the outset, eventually slowing somewhat after the boys have been found (Day 9) to focus on the cave divers and extraction effort.

“I chose to tell the story from the rescuers’ point of view, and I wanted to capture the volunteer spirit of this mission,” said Waller, also explaining that Thai authorities carefully guarded the boys from the eyes of the world that were so firmly fixed on their rescue.

“It’s a human story of the rescue as opposed to the god’s eye view, which is what newspapers kind of report.”

Central to the human story is Belgian-born Irish cave diver Jim Warny, who plays himself.

Waller, who was born in Bangkok, watched the events unfold — “on TV like everyone else” — from Ireland at the time. When he found out about the local connection, he found Warny on Facebook and sent a message.

“I didn’t even expect a reply, but then you did reply and invited me over for a cup of tea,” Waller said, turning to Warny, who also attended the premiere. “That’s how the whole thing began, with a cup of tea at Jim’s house.”

Over conversation and tea a week after the events in mid-July, Waller had the skeleton of a story and the project was born. He jetted off to Thailand to identify the local unsung heroes, whose volunteer efforts are highlighted early in the film.

By early September a script was written and the project was officially announced. In October, Waller was ready to start shooting.

“People these days are so used to getting everything they want at a time of their choosing,” the director said, as he grasped at what drove his sense of urgency. “We live in an era of impatience. People just want things now.”

The director was lucky to get authentic footage at the sites, he said, as the real locations were changing by the day with rapid touristification and new infrastructure.

“As time goes by, these stories also fade,” the director added, saying he hoped the film would remind viewers of what happened, and fill in missing details. To this end, the film tries to be a strict re-creation of the events, without fiddling with the timeline or changing key details.

“It didn’t need embellishment,” Waller reasoned. And the cave diver central to the movie, Warny, was there the whole way to ensure that accuracy.

“It’s a sensitive story,” Warny said. “I was nervous. I also realized that if I want to have control over what’s being portrayed, I should be involved in every aspect. And that’s the way it played out.”

In addition to acting as himself, Warny was involved in the writing, planning process and technical aspects of portraying the rescue. Waller quickly turned to Warny himself to appear on-screen upon the realization that nobody would be able to portray him quite so well.

But Warny is far from the only actual figure in the film. The director said he was inspired upon watching Clint Eastwood’s “The 15:17 to Paris” (2018) about a thwarted terrorist attack.

“I didn’t know that the three guys in the lead roles were actually the people themselves,” he said. When the credits rolled, “that was a complete revelation to me.”

“If I didn’t have access to them — they were probably going to be actors,” Waller decided. “If I had access to them and could get them to appear in the film as themselves, then I would use the real people.”

He went as far as scouring news footage for his casting. “We’d have the same faces that you saw on BBC News, reminding you, ‘Oh, wasn’t that the Muslim cook who was at the real rescue?’ Yep, it absolutely was.”

Not quite everyone appears though.

“Everyone’s first comment was like, ‘Is Elon — Who’s playing Elon?’” the director said, referring to billionaire entrepreneur Elon Musk, who was outspoken on Twitter during the rescue with plans to launch a miniature submarine in the cave, and whose defamation suit for comments about one of the cave divers has lately made news.

“We thought, ‘No, that’s very unsavory. Let’s not have any of that in the film,’” the director decided. “Let’s try to keep this clean of any scandal.”

While Warny carries his weight in the film admirably, others portraying themselves do so far less successfully, with several jarring moments where stiff dialogue or amateur efforts jut out from the screen.

Eastwood’s effort was ultimately received poorly by critics namely on the choice Waller emulates, but “The Cave” is fortunate in these moments for its unyieldingly quick pace and abundance of feeling — there’s no time to linger in the awkwardness as the audience is flung forward in the narrative and emotion.

Yet for any shortcomings a small, hastily done production with so many non-actors may have had, there was a bigger overarching advantage: access. “Hollywood would never be able to make this film, the way it’s come out like this,” Waller reflected. “They just never would have the access.”

Whereas the Hollywood projects he had seen to in Thailand were like moving around a small army, “we were very nimble and we were able to work in a more guerrilla style,” the director said.

Since its world premiere in Busan, “The Cave” has already been shown at film festivals in Vancouver, London and Manila, and soon heads to Australia, Ireland and Indonesia, as it seeks distribution. Its first wide theatrical release, however, is already set: Bangkok on Nov. 21 before going nationwide Nov. 28. Malaysia follows on Dec. 26.

“This is their story,” the director smiled. “Why not play it in Thailand first?”

Read Next
Billy Crawford celebrates 1 year of being sober, opens up on being called ‘too thin’
EDITORS' PICK
Cherry Mobile teams up with Cloud Panda PH, launches online store
COOCAA TV Bounce Back Sale offers up to 50% off
COVID-19 infection in PH soars to 21,340; 714 new cases logged
Smart launches new LTE-Advanced Pocket WiFi Plans starting at P699 per month
Enforcers who abuse anti-terrorism measures will be punished – Lacson
Villanueva urges gov’t to ramp up aid for unemployed workers amid pandemic
MOST READ
Can Crawford survive the Pacquiao blitz?
Something about KC that worries mom Sharon
Kim Chiu’s viral dance video has no violations, MMDA agrees
2 suspects die, P244-M shabu seized in Parañaque drug bust
Don't miss out on the latest news and information.