NEW YORK  — In what’s quickly become a familiar scene, Cuba Gooding Jr. trotted into court Thursday to face yet more charges in his New York City sexual misconduct case, accused for the third time of groping or touching a woman at a Manhattan night spot. 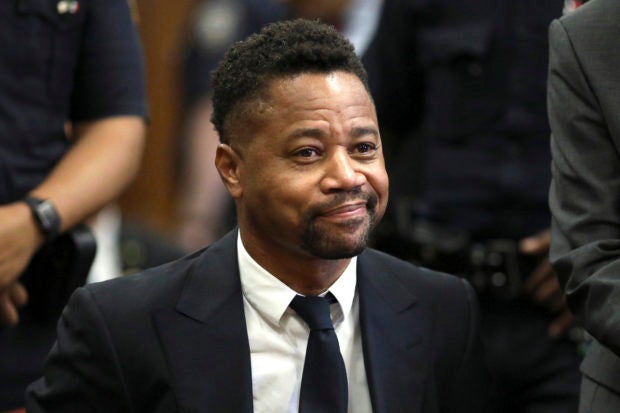 Cuba Gooding Jr. appears in court in New York on Thursday, Oct. 31, 2019. Gooding Jr. pleaded not guilty to an indictment that includes allegations from a new accuser in his New York City sexual misconduct case. Prosecutors at Thursday’s arraignment said they’ve also heard from several more women who could testify that the 51-year-old actor has had a habit of groping women over the years. His criminal case now includes allegations from three women. (Alec Tabak/New York Daily News via AP, Pool)

Gooding, who was in court just two weeks ago after a second accuser came forward, pleaded not guilty to an updated indictment that covers all three alleged incidents. His lawyers argued the newest charges should be thrown out because the paperwork doesn’t specify what he’s accused of doing.

They also said they were dismayed that Gooding, 51, was never invited to testify before the grand jury and that prosecutors failed to show videos of the encounters, which they contend prove his innocence.

“We believe without question that the case is purely a case of malicious prosecution,” Gooding’s lawyer, Mark Heller, said after the arraignment.

He likened the new charges and repeated arraignments to former New York judge Sol Wachtler’s observation that prosecutors could convince a grand jury to “indict a ham sandwich.”

But it’s not just the criminal allegations Gooding has to worry about.

Prosecutors said they’ve heard from more women, in addition to a dozen who’ve already come forward, who could testify that the Oscar-winning star of “Jerry Maguire” was also inappropriate with them over the years.

Adding to the drama, Judge Curtis Farber warned both sides against leaks after material from the high-profile case has wound up on gossip websites. Doing so, could influence potential jurors, Farber said.

Assistant District Attorney Jenna Long raised the specter of leaks at Thursday’s arraignment, saying a video clip she shared with Gooding’s lawyers this week from one alleged incident wound up on a news website less than a day later. They denied leaking the video.

Also this week, a New York Police Department detective suspected of leaking the mugshot from Gooding’s arrest was stripped of his gun and shield and placed on administrative leave.

“I would remind both parties that the proper place to try this case is in the courtroom, not the media,” Farber said, referencing the mugshot leak.

As for the new charges against Gooding, the details are fleeting.

The updated indictment and accompanying paperwork state only that Gooding is charged with forcibly touching a woman’s sexual or intimate parts at the LAVO New York nightclub around midnight on Sept. 9, 2018.

That accuser is believed to have come forward to the authorities after Gooding’s Oct. 15 arraigned on the earlier indictment covering two alleged incidents, his lawyers said.

Long said it is a “previously unknown incident,” and that she is not one of the women who’ve come forward as potential witnesses.

The other alleged episodes that led to criminal charges have been described in more detail, and prosecutors said there is video showing all three.

Gooding was arrested in June after a 29-year-old woman told police that he squeezed her breast without her consent at Magic Hour Rooftop Bar & Lounge near Times Square.

On Oct. 15, he was arraigned on charges he pinched a server’s buttocks at TAO Downtown about a year earlier, after making a sexually suggestive remark to her earlier in the night.

Heller said the video of the TAO incident shows Gooding tapping the woman on the back with a fingernail and turning around to give her a high-five to say goodbye as he’s leaving the club around 4:30 a.m.