'The Grudge' reboot gets a terrifying trailer | Inquirer Entertainment

WATCH: Just in time for Halloween, ‘The Grudge’ reboot gets a terrifying trailer 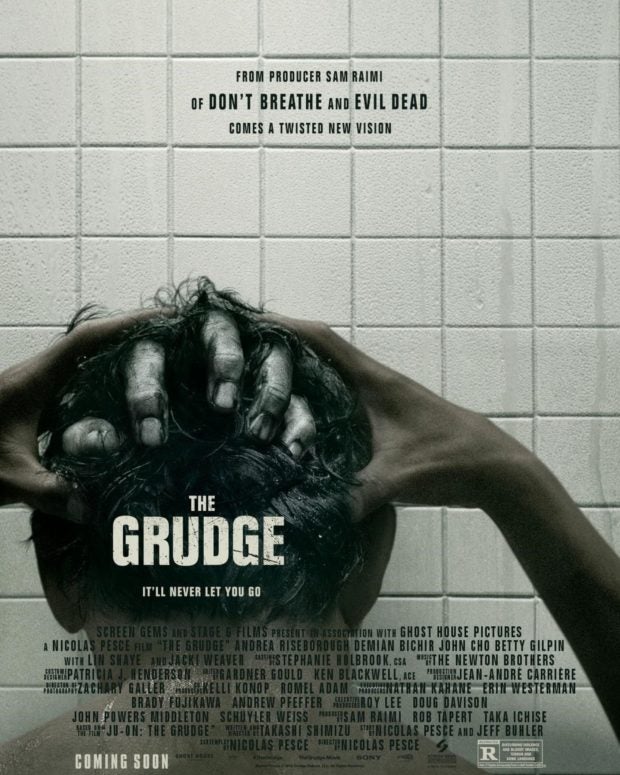 Nicolas Pesce’s “The Grudge” will be released in United States theaters on Jan. 3, 2020. Image: courtesy of Sony Pictures via AFP Relaxnews

Sony Pictures has just unveiled the first trailer for the reboot of “The Grudge”. The cult horror film, starring Andrea Riseborough, Betty Gilpin and John Cho, is slated for a theatrical release in Jan. 2020.

The horror film’s plot will focus on Detective Muldoon after the discovery of an old house haunted by an evil spirit, who casts a spell on whoever enters. After finding herself tracked by the vindictive ghost, Muldoon must do everything in her power to protect herself and her son against an almost certain death.

Andrea Riseborough will lead the cast as Muldoon, with Demián Bichir, John Cho, Betty Gilpin, Lin Shaye and Jacki Weaver. The reboot will be directed by Nicolas Pesce.

This is the fourth installment of the “Grudge” franchise, following the 2004 original and its 2006 and 2009 sequels. The producers of the first two films in the saga, Sam Raimi and Rob Tapert, have signed on for the new project. The very first episode, starring “Buffy the Vampire Slayer”‘s Sarah Michelle Gellar, grossed over $187 million (P9.5 billion) worldwide at the time. CL/NVG

Read Next
‘Game of Thrones’ creators opt out of the new ‘Star Wars’ trilogy
EDITORS' PICK
Is it safe to talk politics again at family gatherings? ‘The Reconciliation Dinner’ shows us what that’s like
House energy committee chair Arroyo bats for cheap electricity
Pagasa: Warm, sunny Sunday in most parts of PH
vivo’s coming to town to grant wishes with more holiday promos
EDITORIAL: To a bike-friendly future
The Best Tech Gifts For The 2022 Holidays
MOST READ
LOOK: Vhong Navarro transferred to BJMP detention facility in Taguig
The Elephant Man in the Senate
Posh village as ‘shabu’ haven
LOOK: Zanjoe Marudo bonds with Ria Atayde, her family
Don't miss out on the latest news and information.