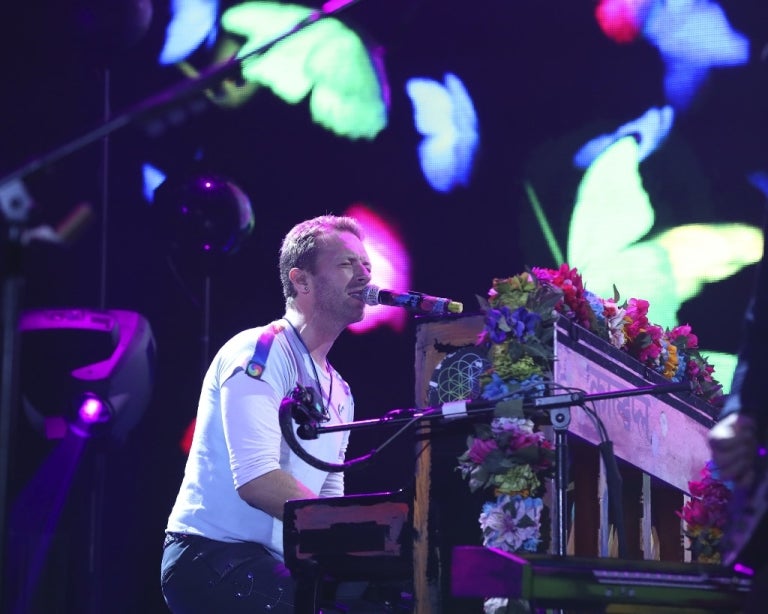 Chris Martin from Coldplay performs on stage during the Global Citizen Festival G20 benefit concert at the Barclaycard Arena in Hamburg, northern Germany on July 6, 2017 on the eve of the G20 summit. Image: AFP/Ronny Hartmann via AFP Relaxnews

Speculation that Coldplay would soon release their eighth studio effort arose after some promotional posters appeared in major cities across the world.

The black-and-white photographs depicted the band dressed like an old-time ragtime band with a drumhead reading “The Wedding Band Dance Orchestra”, along with the date Nov. 22, 2019.

Coldplay recently addressed rumors in a letter to their fans, announcing that they will unveil their new double album “Everyday Life” next month.

“For the last 100 years or thereabouts we have been working on a thing called Everyday Life. In the classifieds you might write ‘double album for sale, one very careful owner.’ One half is called ‘sunrise’, the other ‘sunset’ […]. It is sort of how we feel about things,” they wrote.

Although details about “Everyday Life” are still scarce to this date, Coldplay collaborator Mat Whitecross teased last year that the band’s new album would “surprise” fans.

“They always want to be challenging themselves and surprising other people — that’s why they work with people like Brian Eno. In that sense, I’m sure whatever they do next will surprise people,” he told NME.

Since their 2015 “A Head Full of Dreams”, Coldplay embarked on a massive world tour in support of their seventh studio album.

Late last year, they also unveiled a career-spanning documentary named after the LP, along with a concert film and live album both entitled “Live in Buenos Aires”.

They also teamed up with Pharrell Williams and Stormzy for two collaborations that appeared on “Global Citizen EP 1” which they released under the group name Los Unidades. JB