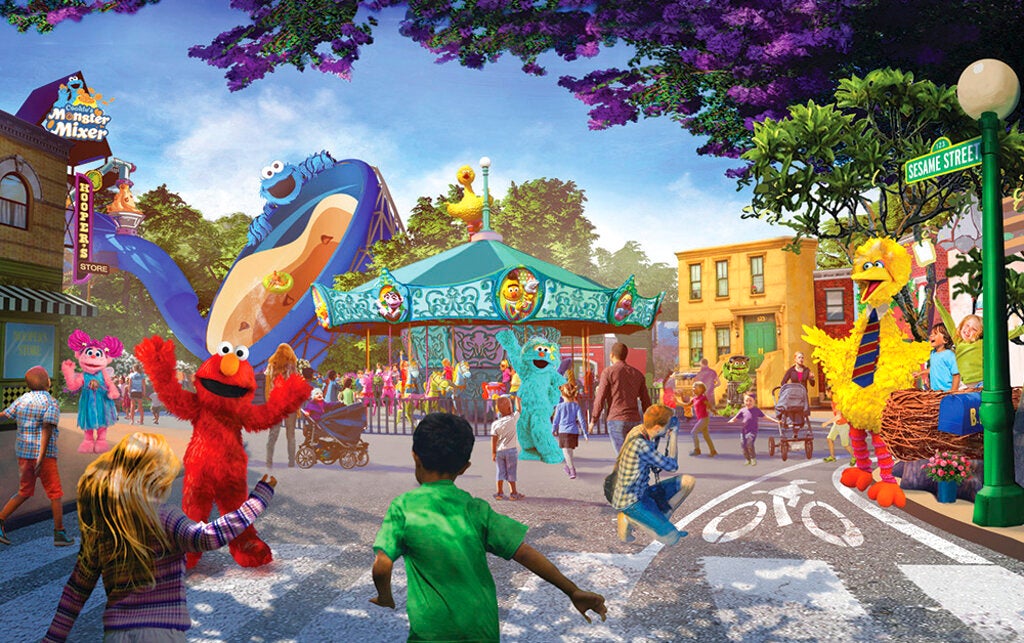 This undated artist rendering provided by PGAV Destinations shows a depiction of the new SeaWorld and Sesame Workshop theme park, which is scheduled to open in San Diego in 2021. (PGAV Destinations via AP)

ORLANDO, Florida — There are plenty of sunny days to sweep the clouds away where SeaWorld is opening its next theme park.

Officials with SeaWorld Entertainment and Sesame Workshop announced Monday that they are opening the country’s second Sesame Place park in San Diego in spring 2021. The first Sesame Place theme park opened almost 40 years ago outside Philadelphia.

The announcement continues a pivot by Orlando-based SeaWorld away from live animal shows.

The new 17-acre (6.5-hectare) Sesame Place will be located south of SeaWorld San Diego. The space is currently occupied by the water park, Aquatica San Diego, which will have its final season next year.

Monday’s announcement is part of an expanding partnership between SeaWorld and Sesame Street, which is celebrating its 50th birthday this year. SeaWorld’s Orlando park opened a Sesame Street section earlier this year. Officials wouldn’t disclose the cost of the park.

Steve Youngwood, president of media and education and chief operating officer of Sesame Workshop, the nonprofit behind Sesame Street, said the two brands have common objectives.

“We want to engage and educate families. We mutually respect each side’s expertise and we collaborate together to make it work,” Youngwood said.

SeaWorld announced the end of its breeding program in March 2016, after years of pressure from animal rights advocates and shifting public opinion about orcas being held in captivity.

The protests intensified after the release of the 2013 documentary “Blackfish,” which focused on the life of Tilikum, a killer whale responsible for killing a trainer when he dragged her into a pool in front of shocked visitors in 2010.

The company in the past year, though, has seen a reversal of fortune. Attendance was up 8.6% during the 2018 fiscal year, as was revenue. For the first half of this year, attendance was up 1.7%.

In the past year, SeaWorld also has been offering specialized services at its parks for visitors with autism, and Sesame Place San Diego will also offer those services.

The San Diego park will be slightly larger than the Sesame Street park outside Philadelphia. Construction will start in Aquatica’s offseason and resume after Aquatica closes for the season next year.

The park’s opening in San Diego will open the Sesame Street experience to the western U.S., as well as to visitors from south of the border, said Marilyn Hannes, president of SeaWorld San Diego.

“I think we will pull a more international audience,” Hannes said.

Back to those sunny days sweeping the clouds away, per Sesame Street’s theme song, it is sunny in San Diego more than two-thirds of the time, according to data from the National Oceanic and Atmospheric Administration.