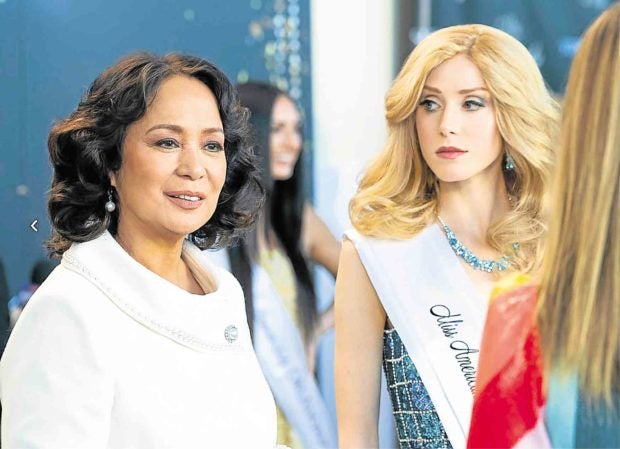 ATLANTA, GEORGIA—We were happily shooting the breeze with the witty duo of Arden Myrin (who plays Regina Sinclair) and Irene Choi (Dixie Sinclair) on the Atlanta set of Netflix’s “Insatiable” when Gloria Diaz was ushered in to sit beside us and join the chitchat.

Fifty years after winning the Philippines’ first Miss Universe title, the iconic beauty queen and award-winning actress could still make an entrance without trying, as if she was born to make heads turn.

But don’t be fooled by her relaxed countenance, Gloria would be the first one to tell you that she had to (wo)man up for her foray into Hollywood—and in a very popular Netflix show at that.

“What’s difficult about it is that some people think my role is bigger than it is,” she told us last week at the meet-and-greet event that she and lead stars Debby Ryan and Dallas Roberts graced at BGC. “Usually, I don’t care what people think. But with all the hoopla surrounding my participation in ‘Insatiable,’ people don’t realize I’m just a guest.”

“But I truly enjoyed myself. I had time to sit down and be amazed at the way they do things on set. The people were so kind… they’re very mabait. You see them on TV, then you meet them and realize they’re just human. That’s how people think about me back home (laughs).”

Yes, you’ll see Gloria’s splashy and catty cameos as Gloria Reyes, a former Miss Universe and Miss Philippines with a reputation as “the fiercest coach on the beauty pageant block,” in Episodes 6 and 10 of the series’ second season, which began streaming last Friday.

Gloria flew to the United States twice to shoot her scenes for the series, she related. “The first time, I was there for eight days. The next time, I was only there for five, because I was also taping for the ABS-CBN series, ‘Los Bastardos.’ For my second visit, I was on the Atlanta set for only one afternoon, maybe for 15 minutes.”

Was Gloria competitive when she was younger?

“I wasn’t competitive when I joined the Miss Universe pageant,” she told us. “In fact, I was very complacent. I just looked like I felt I didn’t have to compete… bahala kayo. Feeling lang (laughs). You just hope you win; if not, there are other things to do.”

Talking about getting cast in the US series, Gloria said she ignored a message on Viber the first time she was asked to appear in “Insatiable.” But when she realized that the invitation was the real deal, she said she suddenly got nervous.

“I was thrilled, but I was also among total strangers,” she recalled. “I’m so used to working as an actress back home, so I felt uncertain. I had very few lines, but I was worried about making a mistake (laughs). So, I brought my daughter, my sister and my assistant. Then, I noticed that everybody went to the set with nobody else, no alalays—they just took care of themselves! And I liked being a bitch on the show (laughs).”

In Atlanta, we told Gloria that her stint with the US series about beauty pageants couldn’t have come at a better time, since it’s been 50 years since she won the coveted Miss Universe crown in 1969. Was the transition from beauty queen to actress easy for her?

“It wasn’t immediate,” she said. “I was 18 when I joined the pageant. But I entered the movies only when I was 24 because the offer was enticing—they said we were going to shoot on a beautiful island. That was the catch for me (laughs). It was only when we arrived on the island that I realized we were doing a serious movie, with costumes and all.”

As it turned out, that particular 1974 classic—Celso Ad Castillo’s “Ang Pinakamagandang Hayop sa Balat ng Lupa”—would continue to be popular among film buffs and critics to this day. 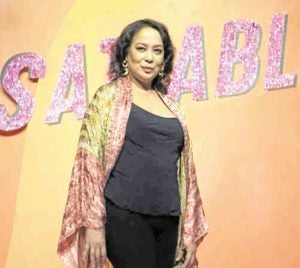 Our Q&A with Gloria:

How has the beauty pageant world evolved since 1969? It has changed a lot. When I first joined a pageant 50 years ago, the whole point of it was about scholarships and fitness.
Everything was wholesome—no ads for cigarettes, alcohol and casinos. Usually, you’re 18 or 19 and straight from home. At the time, when you’re 21, you’re already considered an “older woman.”

The girls in the contest these days are usually 24 or 25, with their boyfriends in tow. And they can join many times.
In my time, the girls came with only a chaperone—you couldn’t even go to the bathroom on your own.

They always ask me for advice. What can I say? Do your best and, if not, try again. And it even involves plastic surgery (laughs)!

In “Insatiable,” it’s funny that the girls themselves are the ones having catfights. In pageants, although not during my time, the ones who are really involved are the people around the contestants—mothers, mentors, stylists and so many coaches.
It’s bigger than the contestants themselves. That’s a whole other story.

The Q&A is the most anticipated in those pageants. How should contestants prepare for it? People don’t realize that candidates rehearsed some of the questions that they will be asked. But if you ask me to be a judge, I don’t want a question whose answer they already know.

My questions are simple, but contestants are always surprised when I ask them—like, what is your concept of success?
Success is when you’re happy, or when you can pay your utang (debts), when you don’t have to worry about Meralco and other bills. But they get so flabbergasted when they hear that question.

When my daughter Isabelle (Daza) was 6 or 7, we would always play that game: Would you marry a fat guy who’s very rich, or a hunk who’s very poor? Then, she would say, “Mom, it’s easier to get thin than to get rich!”

As a judge, I don’t care so much about the answer—it’s the way a contestant conducts herself… I want someone who’s beautiful, pero huwag naman bobo (laughs).
If it’s a difficult question, you can still be candid. You don’t have to pretend you know all the answers. We’re not looking for wizards, right (laughs)?

How does she sustain her visibility in the biz? Not every beauty queen ends up doing well at acting, but some do. We know who you’re talking about, right (laughs)? Because I “know”; I’m aware.
Even the current girls, [Miss Universe 2015] Pia Wurtzbach and [Miss Universe 2018] Catriona Gray, that’s what they want to do.
So far, the ones who have gotten into show biz are [Miss Universe 1971] Margie Moran, [Miss International winners] Aurora Pijuan and Melanie Marquez—they all went into it. As they say, many are called, but few are chosen.

What was it like reuniting with Elizabeth Oropesa in the acclaimed indie film “Si Chedeng at Si Apple” 43 years after “Ang Pinakamagandang Hayop sa Balat ng Lupa”? We played lesbians in it. It was funny. We had two directors (Rae Red and Fatrick Tabada) in that film and they would sometimes argue we didn’t know who was to be followed (laughs)! But the movie was done well.

What does she remember about turning over the crown to her successor (Puerto Rico’s Marisol Malaret)? The way you pass your crown on to the next queen is the weirdest day.
I have told this story many times before: For the one year, you are the universe. Everything begins and ends with you—the party doesn’t start until you get there.

On the day of the pageant, I had a limo. I did the usual walk before they called the winner. Then, they announce the new girl, and you pass the crown on to her.

I tell you, one second after I put the crown, somebody pushed me and I almost fell!
And when I was looking for my car to go home, it had already been transferred to the next girl. Good thing my family was there with a car. But if you’re on your own, woe to you! Matatauhan ka talaga!

Even your room, where you stayed for a whole year, you’re given 24 hours to vacate, because the new queen will take over.

But it’s good to learn these realities early. I used to tell both my daughters (Isabelle and Ava) to never be vain, because there’s always going to be somebody better-looking right behind you.

As a former Miss Universe, one would think she’s “set for life.” What does Gloria think explains the Filipinos’ fascination with beauty pageants? They say beauty is its own excuse for being. For others, it’s a step to a better life. When you win, you’ll still probably be remembered even when you’re 90.

I remember meeting Ruffa Gutierrez’s daughter Lorin once. Ruffa said, “Darling, do you know that Tita Gloria won Miss Universe, while mommy only placed third in Miss World (in 1993)?”
Then, her daughter looked at me and said, “Yeah?” Only a child would be able to say that (laughs)!

How does it feel to be a Netflix star? Or a Netflix extra (laughs)? OK, a guest star.
Seriously, I’m thrilled—and it’s awesome! I hope they cast more Filipinos in their shows.

Read Next
Brian McFadden to treat PH fans to ‘romantic, intimate’ concert
EDITORS' PICK
Over 3 Million worth of prizes to be won at Smart Padala’s SENDali Manalo Promo!
Acer starts the year off strong with the Aspire Vero National Geographic Edition
Uproar over no vax, no ride policy: Maybe it’s time for gov’t to say sorry—Bello
97% of COVID-19 beds at PGH currently occupied
Japan brings back virus restrictions over Omicron surge
Gear up and get ready to play with Yamaha Mio Gear
MOST READ
1Sambayan names 7 aspirants in its 2022 Senate lineup
Emma Stone calls Andrew Garfield a ‘jerk’ after he ‘lied’ about his ‘Spider-Man: No Way Home’ appearance
Guevarra to Acosta: Obey rules on unvaccinated
PH to import 60,000 tons of fish to cover shortage
Don't miss out on the latest news and information.