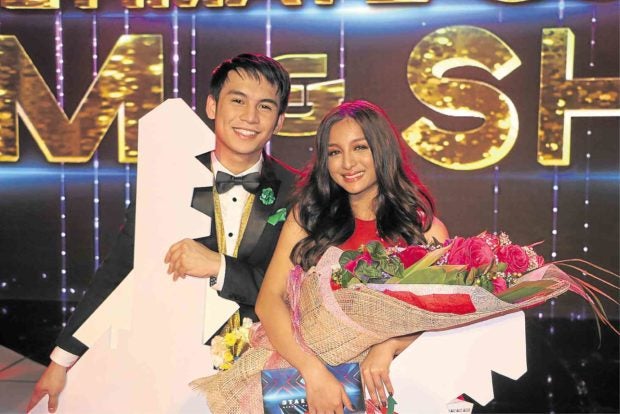 It had been barely an hour since they were hailed Ultimate Survivors of the reality talent search “StarStruck,” but Kim de Leon and Shayne Sava were already thinking about the road that lies ahead of them.

Now, they are celebrating their triumphs. But they both know that things will only get tougher from here on.

“I hope we get projects very soon. But I know that our journeys don’t stop here; our careers are just getting started,” Kim told the Inquirer, shortly after the recent finals night of the competition’s seventh season.

Kim, 19, hails from Batangas and has appeared in a number of television commercials, including one for Jollibee. He took up computer science at AMA Computer College—thanks to a scholarship he got as part of an ad he did for the school—but had to stop after his first year.

“I think I’m now ready to work as an actor,” Kim said. “I plan to undergo additional workshops because learning shouldn’t stop.”

Shayne was just as nervous, but she believes that the training she received during the course of the contest had equipped her with a solid foundation.

“The preparations we did were intense in the show. This contest exposed us to different genres, like drama, comedy and horror,” she related.
“They made sure that we would be up to the task when we go out to the ‘real world,’” she added.

Before joining “StarStruck,” the 17-year-old hopeful from Rizal is a Grade 12 student running for honors. She was raised by her grandmother, who takes her to auditions in Manila.
Finances are tight, she said, so they had to resort to borrowing money from neighbors, just so they could afford the commute.

“I really didn’t expect to win. But I worked and prayed hard. Now, I’m able to reach my dreams,” she added. “Our mentors and judges hugged me, and they asked me, ‘Are you ready for the next chapter?’ And then I just thanked them for all the advice and everything they taught us.”

Kim and Shayne, who bested finalists Allen Ansay and Lexi Gonzales in the finals, both received a P1 million cash prize, house and lot, and a management contract with GMA 7 worth P5 million. Both newbie actors plan to use their winnings to continue schooling and help their families.

“Being an actress is not only my dream, but also my family’s. They have supported me all the way and I want to reciprocate that. I’m also thankful to all the fans who voted for me,” Shayne said.

“I also plan to save some for myself, because I still want to continue my studies while pursuing a show biz career. Education is still very important. It’s for my future,” she added.

Kim almost gave up on his dreams of becoming an actor, because of the countless rejections he had experienced.
“There was a point in my life when I was resigned to the possibility that I would never be able to land anything more than random commercials or guestings,” he said.

“But I tried my luck; I had nothing to lose. Now, here I am. It’s a big progress, but it doesn’t stop here,” said Kim, who was overcome with relief.
The cash prize meant that he and his family will no longer be forced to sell their home in Batangas.

“I couldn’t stop crying. I will give my winnings to my family. My mom only works part-time, so we had to accept help from other people. I want to give back to all of them,” he said.