The Cranberries: Life is sweeter the second time around 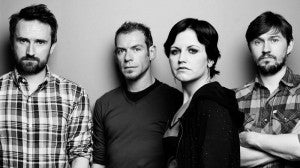 The Cranberries stood out in the 1990s alternative rock scene because its lead singer-songwriter, Dolores O’Riordan, possessed a distinct, captivating voice. The Irish group recorded five albums that yielded a number of hit singles—“Linger,” “Dreams,” “Zombie,” “Ode to My Family,” “Ridiculous Thoughts,” “Salvation,” “Free to Decide,” “Promises”—before going on a four-year hiatus.

Reuniting in 2009, The Cranberries proceeded to record a new album, “Roses,” which was released this year.

The band’s cofounder and guitarist, Noel Hogan, spoke to the Inquirer by phone from Sydney while resting in between shows for its current tour. The Cranberries’ Manila concert is on April 10 at the Smart Araneta Coliseum.

What was the scene like in Limerick before The Cranberries was formed?

Everybody wanted to be in a band. There were gigs seven nights a week. We saw The Smiths, The Cure, Echo and the Bunnymen, all these bands, playing.

The band’s original vocalist was Niall Quinn, who left before the remaining members took on the name The Cranberries. Why did you choose a female singer to front it?

We were looking for a replacement. When Dolores came in, she sounded completely different. She had such a strong voice and she sang in an effortless manner. I don’t think she was even aware of it.

The band had just started out when it fired its first manager, who also produced its first EP. What went wrong?

We had different ideas on how the songs should sound. There was a lot of pressure from the record company on what direction to take. We also thought the EP was overproduced.

The Cranberries achieved commercial success and one of its most famous songs was “Zombie,” which was about political strife in Ireland. Was it natural at that time for the band to tackle social issues through songs?

Before “Zombie” came out, most of the songs we wrote were about love and relationships. We were on tour and CNN was on TV when Dolores started writing the lyrics to “Zombie.” She felt strongly about it and we had no idea it was going to be a massive hit.

What were the pitfalls of fame and fortune in the case of The Cranberries?

The downside is you tend to lose your way … There’s always the pressure of coming up with another hit. The trick is how to avoid falling into that trap.

We felt we were not doing anything different. It was just album, tour, album, tour … and nobody was enjoying it anymore. I had ideas, Dolores had her own ideas. And then we started raising kids and focused more on family life.

Did you find fulfillment in your solo projects?

Going solo was like having a massive weight off my shoulders. I was able to move on after years of being in a band. Suddenly, every dream is yours alone … You make good and bad choices but it’s all right. I started doing production work… I totally enjoyed life on my own.

The band said it felt right to get back together recently. What was different this time around?

We were getting older and there was no point in worrying over petty things in the past. We laugh a lot more these days.

What have you learned so far from the music industry?

This is a job that can be fun. It’s important for musicians to enjoy every minute of it, because in the blink of an eye it could be over. And then you wonder where it all went. You have to soak it all in, everything that happens while you’re on the scene.