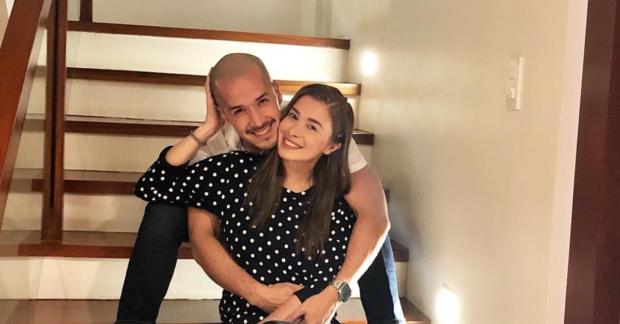 Cruz shared a series of photos of her and Mathay via Instagram on Sept. 18, ranging from their first ever meeting to their first night out with friends and their first Christmas and New Year together.

“First photo was when I first saw you personally after texting and talking over the phone for a month,” Cruz said. “I was sick then and you asked if you could accompany me for my blood work…”

Cruz also shared that her now manager Arnold Vegafria was surprised when he saw her and Mathay together for the first time with their friends at the Prive Luxury Club in Bonifacio Global City.

“We saw my now manager @arnold_vegafria who was surprised (or shocked?!) to see I am publicly and finally dating after being separated for more than 3 years,” she said.

It is known that Cruz filed a petition for the annulment of her marriage to actor Cesar Montano in 2014, a year after they parted ways. Her petition was granted by a court on Sept. 18, 2018.

In another photo, Cruz can be seen resting her head on Mathay’s shoulder as she visited him after he had his ACL/MCL and meniscus tear surgery.

“I visited you and even stayed overnight to take care of you,” she said. “Wanted to be there for you everyday but I had commitments and work to attend to.”

Another heartwarming photo showed Cruz, Mathay and their children from their previous marriages out on their first movie date.

“Ang daming (There are so many) memorable firsts! Thank you for being so nice and supportive not just to me but the girls too,” she said. “Ang bait-bait mo my Macky! Sometimes, I still wonder if I am really deserving of you.”

Cruz added she was happy she listened to actress Ara Mina, Mathay’s half sister, who advised her that she should not close her doors on Mathay and give herself and him a chance.

“Look at us now! Happy 3rd my Macky! Thank you for being you!” said Cruz. “For accepting me for who I really am and for being a wonderful father figure to my girls. Know that you are appreciated.”  /ra

Sunshine Cruz gets apology from chef who sent her lewd messages