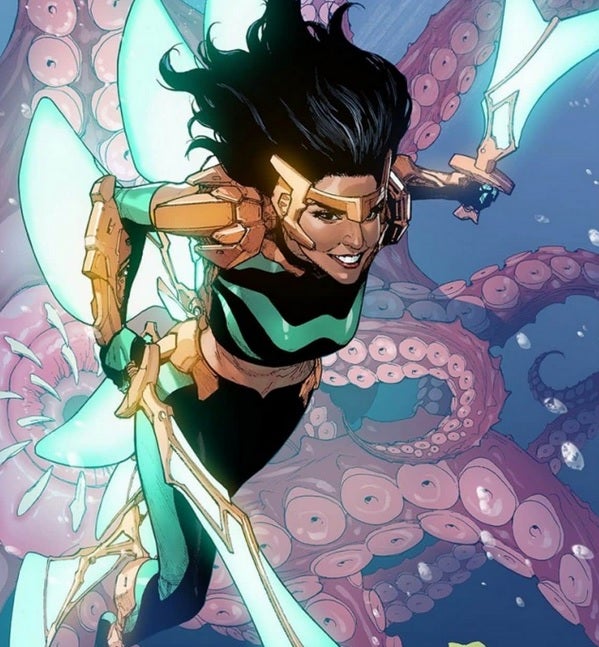 “The response has been insane,” Yu told the Inquirer of the Cebuana character he cocreated with “Agents of Atlas” writer Greg Pak. “I couldn’t be happier. I really am surprised by how fast she has been accepted and how far she’s come, considering she’s just a few months old.”

Yu, who is currently the penciler of a new “X-Men” title, related, “My editors reached out to me, like with most projects. We all worked closely together via email.”

Wave, aka Pearl Pangan, is a hydrokinetic, or a person with the power to control water. Design-wise, her look was influenced by the illustrator’s music and game preferences, aside from the writer’s ideas. 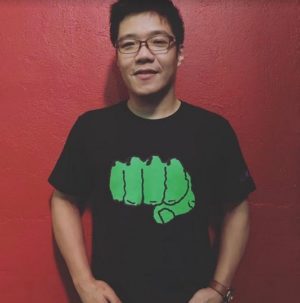 “I started out with a full-body wet suit as suggested by Greg and worked from there,” he recalled. “She is water- and tech-based so I added the sci-fi armor. I used [the color] teal, as the band Weezer’s ‘Teal Album’ just came out that time, and I thought it works well with gold or yellow. I added the fins to drive home the fact that she is mobile in water. I am very much influenced by video game design. To add a Filipino touch without explicitly plastering the flag on her, I gave her kampilan/Lapu-Lapu swords with a sci-fi twist.”

While not the first Filipino superhero in American comics—artist Whilce Portacio created Grail for his Image series “Wetworks” in the early ’90s, and writer Matt Fraction introduced superteam Triumph Division in Marvel’s “Iron Man” in 2008—Wave received immediate interest since the announcement of her existence in March. She debuted in “War of the Realms: New Agents of Atlas” in May. Some fans, having just seen “Avengers: Endgame,” hoped that she would translate to Marvel’s live-action world, eventually.

The character is already crossing over to another medium. “Her involvement in [the game] ‘Marvel: Future Fight’ will be substantial,” Yu said. “I look forward to seeing more video game iterations on her design.”

The artist, who also drew DC Comics’ “Superman: Birthright” in 2003, works using a Wacom Cintiq and the program Clip Studio, but still does traditional covers using a Pentel pocket brush pen and disposable Micron pens. On his longtime partnership with Marvel Comics, he reiterated important disciplines: “Dependability and work ethics. Make sure you return emails and calls and always be honest with deadlines and your capabilities. Many good artists lose their shot because they choke under pressure, and worse, go radio silent when editors come looking for them.” 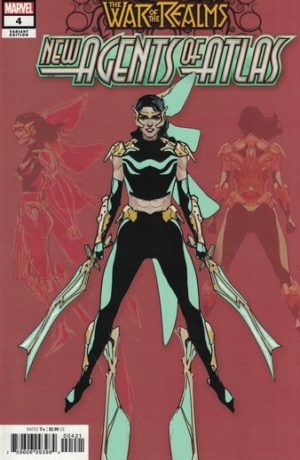 Apart from comics, Yu designed vehicles for Joss Whedon’s science fiction film “Serenity” in 2005. “It was a good experience and a chance for me to try new things,” disclosed Yu. “I did work on other films but they were uncredited. I also did some video game designs a while back. The main difference from comics is the sheer amount of revisions involved in film and concept art design. Then there is the secrecy, and NDAs (nondisclosure agreements), where a huge amount of work may never be seen by the public, until years later.”

Having drawn Marvel’s popular mutants, first in “Wolverine” in 1997 and in subsequent “X-Men” titles, Yu is illustrating the team’s adventures again in another flagship series.

“I thought I wasn’t ready yet at that time,” he recounted. “I always dreamed of drawing the X-Men but my skills weren’t ready yet. Too many characters to draw, too.”

Of all the characters he’s penciled, which is he most proud to have drawn? “The Avengers and Wolverine, but now it’s definitely the X-Men,” declared Yu.

On the massive success of the Marvel Cinematic Universe, Yu said, “It’s tremendous, but I am not sure how much of it translates to comic sales. It can only help. Marvel characters are now back to being household names.”