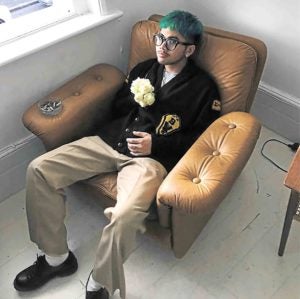 At the age of 12, Rome Gomez—the London-based Filipino musician who goes by the name No Rome—was already writing songs and putting them out on MySpace.

And it wasn’t just a fleeting interest.

From the get-go, he already knew what he wanted to do. As a young kid, he would envision himself becoming a professional artist, wondering what kind of sound he would be crafting should he indeed end up becoming one.

Perhaps this is but a natural offshoot of growing up in a music-loving family: His mother sang in church while his father taught him how to tinker with music production software. At home, stereos blasted new wave ditties by Joy Division and New Order.

In a celebratory mood? Music. Bored? Music, still. He lived in it.

He would continue making music, eventually experimenting with other genres like R&B, hip-hop, rock and pop-punk. He listened to Box Car Racer, Bjork, Slipknot, David Bowie, My Bloody Valentine.

And it showed in his sound. His second EP, “Crying in the Prettiest Places,” for instance boasts six sonically diverse tracks, including “5 Ways to Bleach You Hair,” a screamo-tinged pop song, and “Stoned in the Valley,” which melds 2000s pop-punk and emo rap.

But while composing songs feels organic to him, playing them in front of a crowd is another story. And when you suddenly find yourself holding court at the O2 Arena in London or standing before a sea of people at the Coachella music festival, you have no choice but to learn the ropes—and fast.

“It’s something I’m still trying to get used to,” said No Rome, who landed such gigs as a supporting act for the British pop-rock band The 1975, which is a collaborator and label mate at the British record company Dirty Hit.

“It’s quite intimidating because you don’t see everyone. But it’s fun, and every show is different … Most of the time, I simply dance as if I’m in my bedroom—throwing my hands and being a goof,” he told the Inquirer in an interview in his dressing room, two hours before he took the stage at SM Mall of Asia Arena to open for the Manila stop of The 1975’s Asian tour.

Together, they performed No Rome’s biggest hit thus far, “Narcissist”—a bouncy, synth-pop bob, which features vocals and production from The 1975 front man Matt Healy and drummer George Daniel. “It has been fun because this is my first ever tour … Everything feels new,” the 22-year-old artist said of going on the road with the band.

No Rome is set to return to Manila for a show—mounted by MMI Live—on Oct. 6 at Market! Market! Activity Center.

How did you get discovered by Dirty Hit? I was just doing my thing, putting my music online via Soundcloud and YouTube … I was also playing at places like Route 196 and Saguijo.

One day, Samuel (Burgess-Johnson, artist and collaborator of The 1975) stumbled upon my music and hooked me up with the band and Dirty Hit, which signed me up later on. I got lucky.

When did you move to the UK? I was 18 going on 19, so about three years ago … I actually had the option of going either to the UK or the US. But I chose the former, because a lot of the musicians and artists I admire are from there. I wanted to see it for myself.

What’s it like collaborating with Matt? He sees me as a little kid he hangs out with! Making music brought us together. We love music. And it has just been fun working with him in the studio.

What was your early life like here in Manila? I have always wanted to dress up, be a little weird. But my mom always reminded me to be careful and avoid going home late, especially with the way I looked. Once in a while, someone would pick a fight with me just because they thought I was maangas. But eventually, I have learned to protect myself from anything that could harm me, physically or mentally.

What does playing in Coachella mean to you? I’m hoping that it opens up more doors that lead to bigger things. But it has been a learning experience on what it feels like to be on that kind of stage.

Do you find it weird that you got your breakthrough overseas? I take the love I can get. Sometimes, you wonder about it, but it is how it is.

Do you plan to shuttle in between London and Manila? I will be here from time to time. I miss my family, too. Home is home. London is London. I love them both.

Any plans of collaborating with Filipino artists? I want to give it a shot. The goal is to just focus on creating good music and art for everyone to enjoy.

What inspires you to write? Movies, life situations … and hearing good music is always inspiring, of course. And whether I’m having a bad day or a good day, I have to write my thoughts down.