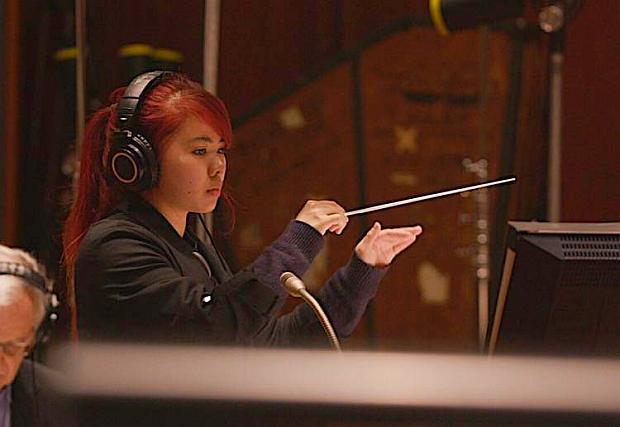 Composer Jaimie Pangan conducts a 65-piece orchestra at the Warner Bros. Scoring Stage in Burbank, California, in May 2019. (Photo from her Facebook account)

MANILA, Philippines — Jaimie Pangan, a 26-year-old Filipino composer, has been nominated in the Contemporary Classical/Instrumental category of the Hollywood Music in Media Awards (HMMA).

Pangan was nominated for her composition “Farewell,” according to a statement issued on Saturday by freelance writer Dahl Bennett.

Pangan said her music composition was for her “capstone” at the University of Southern California (USC), where she earned her master’s degree in Music in Screen Scoring.

“Each year, the program requires its students to compose for a 65-piece orchestra and we could use any scene from an existing movie to rescore to,” Pangan said.

Pangan noted that she dedicated her composition to a tragic scene from J.K. Rowling’s novel, Harry Potter.

“In my case, I wanted to do a sad piece and chose a scene from Harry Potter where Dumbledore died. This was my inspiration for the composition,” she said.

Among the past winners of the HMMA were Lady Gaga (“A Star is Born”), Max Richter (“Mary Queen of Scots”), and Oscar winner Ludwig Göransson (“Black Panther‘).

The HMMA is set in November this year in Los Angeles.

Before studying at USC, Pangan took a bachelor’s degree in Information Technology at the University of Asia and the Pacific in the Philippines in 2015.

After that, she worked at International Business Machines Corp., a computer hardware firm in the Philippines, for three years.

Despite her IT background, Pangan said she had always wanted to pursue a career in music.

“At that time, I was scared and insecure to audition for music school. So I did not bother trying. But when I went to college, my mindset changed. I stumbled upon some books that soon made me want to dream and believe in myself,” she said.

Prior to her master’s degree in USC, she entered the film scoring summer program at New York University.

She received a full scholarship with a travel grant from the Philippines’ National Commission For Culture and the Arts.