The Who teases upcoming new album with single ‘Ball and Chain’ 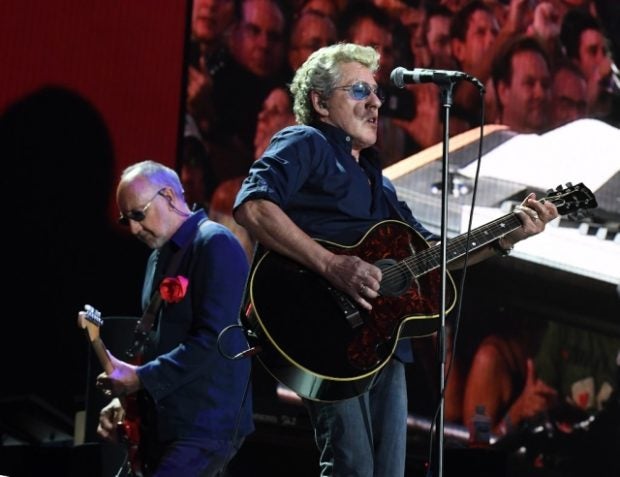 Pete Townshend (L) and Roger Daltrey perform with their band The Who during the third day of the Desert Trip music festival at Indio, California on October 9, 2016. Image: Mark RALSTON / AFP

The rock band has also unveiled the tracklist for “WHO,” which features 11 songs that were primarily recorded between London and Los Angeles during the spring and summer of 2019.

The upcoming album, which marks the Who’s 12th studio effort, was co-produced by guitarist Pete Townshend and D. Sardy with vocal production by Dave Eringa.

“I think we’ve made our best album since ‘Quadrophenia’ in 1973… Pete hasn’t lost it. He’s still a fabulous songwriter, and he’s still got that cutting edge,” frontman Roger Daltrey teased in a statement.

Ahead of the album release on November 22, The Who has shared a highlight from the project, entitled “Ball & Chain.”

In a statement, The Who revealed that their upcoming album will allude to a wide array of themes, such as musical theft, spirituality, reincarnation, the power of memory, and “an old rock star that has lost his marbles.”

“This album is almost all new songs written last year, with just two exceptions. There is no theme, no concept, no story, just a set of songs that I [and my brother Simon] wrote to give Roger Daltrey some inspiration, challenges and scope for his newly revived singing voice,” Townshend added.

This fall, The Who are touring across the US with several dates at the Hollywood Bowl in Los Angeles.

Next year, they will embark on a world tour in support of “WHO,” with tickets going on sale September 20. NVG

Read Next
Lupita Nyong’o and Danai Gurira’s ‘Americanah’ adaptation​ gets series order at HBO Max
EDITORS' PICK
1,797 more Covid-19 infections raise PH active cases to 33,603
New Year, New Rediscoveries
Acer Philippines welcomes you to its first flagship store
UP president challenges AFP claim on Reds’ campus infiltration
WHO says fabric facemasks still work against virus variants
Is your company a growth champion? Stand up and be recognized!
MOST READ
Wife stabs husband after seeing her younger self in old photos, thought he was cheating
NBI files raps vs top execs of 2 tech firms
Ate Vi’s message to those against ABS-CBN’s franchise renewal
Cop, 12 others killed in Maguindanao shootout
Don't miss out on the latest news and information.

TAGS: new album, Rock, The Who