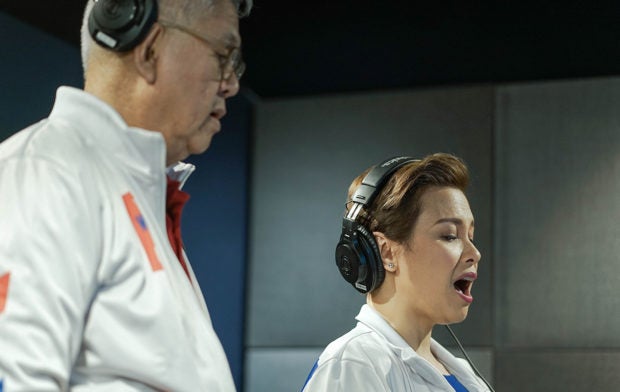 With the Philippines hosting the 30th edition of the Southeast Asian Games at the end of the year, acclaimed singer-actress Lea Salonga—who lent her voice for the event’s official theme song, “We Win as One”—is hoping that the Filipino people could all unite in cheering for our local athletes.

“Athletes have some of the most difficult jobs in the world, because of how hard they push their bodies,” she said at the recent launch of “We Win as One,” whose lyrics were written by Floy Quintos, with music by National Artist Ryan Cayabyab.

The biennial multisport event, which is expected to receive some 11,000 athletes from all over the region, will be held from Nov. 30 to Dec. 11 across 44 venues in Metro Manila, Zambales, Cavite, Batangas, Laguna, La Union and New Clark City, where Salonga shot the song’s music video.

“I salute all our athletes and hope everyone of us supports them, including those who will compete in sports we’re not too familiar with,” the Tony-winning artist said. “I also hope that our sporting commission continues to keep an eye out on where we’re doing well and on other sports we can improve on, excel at and shine in.”

The inspirational, soaring anthem, which was arranged by Cayabyab and Jimmy Antiporda, was recorded by Lea in the studio in only one take. “She always comes in prepared,” Cayabyab said of Salonga, whose discipline is comparable to that of an athlete. “She always takes good care of her vocal instrument, so it is always in tip-top shape.”

Ryan said he was excited and “honored” to work on the project, which was commissioned by the Philippine Southeast Asian Games Organizing Committee. —ALLAN POLICARPIO

Read Next
Crazy Jhenny, September 13, 2019
EDITORS' PICK
Water remains our saving grace right now
The biggest lottery jackpot in the world is $158 million, and even someone from the Philippines could win it
Smart 5G goes live
COVID-19 cases in PH overshoot 122,000 mark
51% of Filipinos think it’s dangerous to publish anything critical about Duterte admin — SWS
PhilHealth mess: Whose heads will roll? Roque says he can’t wait to name names
MOST READ
Captain astonished that his ship delivered Beirut explosive
‘Vexed’: Guanzon raps Topacio over Alzheimer’s remark
Locsin to China: Don’t overinterpret
COVID-19 cases in PH overshoot 122,000 mark
Don't miss out on the latest news and information.