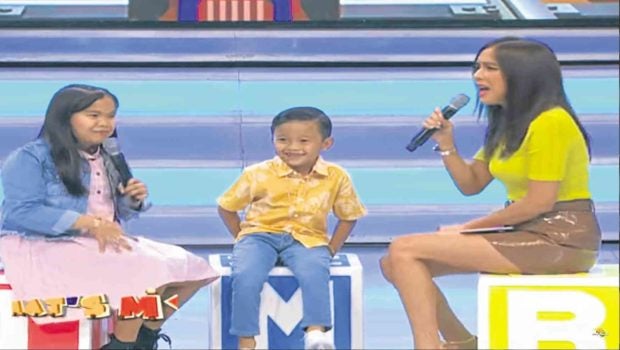 SERIOUS CHILD’S TALK Noontime show hosts Pia Guanio (right) and Ryzza Mae Dizon look befuddled by the seriousness of the issue that contestant John Draven Carag, or Jaydee (center), brought up guilelessly in the question and answer portion of the “That’s My Boy” competition.

But the Sept. 3 episode of  “That’s My Boy” showed kindergarten kid John Draven “Jaydee” Carag exuding a level of patriotism that many Filipinos may find lacking in some government leaders today.

“What do you want to be when you grow up?” Pia Guanio, who cohosts the show’s segment along with child star Ryzza Mae Dizon, asked Jaydee during the question and answer portion.

“A soldier,” the boy said cheerfully. A typical answer, Guanio and Dizon noted.

But Jaydee’s next words caught Guanio and the audience by surprise.

“So I can defeat China … so it couldn’t take our seas from us,” the boy said, referring to the maritime dispute between the Philippines and China over the West Philippine Sea.

But how could someone his age, who has yet to learn how to read, know anything about the issue?, the hosts asked.

Why, what’s wrong about China’s action in Philippine waters? hosts said in a follow-up question.

“They’re taking them. They’re ours. The Philippines owns them,” Jaydee said, adding that some of the  marine resources, like fish and sea turtles, were being seized by China.

Once he has achieved his dream of becoming a soldier, he “would be proud of the Philippines,” Jaydee said.

The video of the episode has since gone viral on social media and also drew the attention of former Foreign Secretary Albert del Rosario Jr., one of the top defenders of the Philippine position against China. —Mariejo S. Ramos