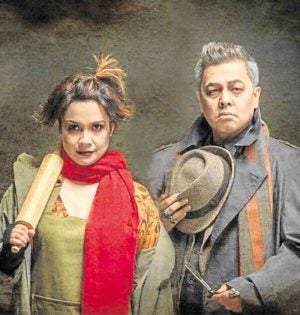 The author (left) with Jett Pangan

By the time you read this, we’ll have officially begun rehearsals for Atlantis Productions’ 20th season ender, “Sweeney Todd.” For this week, it’ll all be about the music, since this score by Stephen Sondheim is very challenging, not just for the notes we’ll have to hit, but for how each vocal part falls in relation to someone else’s.

There is so much intentional harmonic clashing, as well as unpredictable lines of music. Add to that lyrics that will drive us insane (just the last few lines of “God That’s Good” is a prime example), and we’ll be primed for the loony bin.

All joking aside though, everyone in the company is so excited to be starting, never mind how difficult it’s undoubtedly going to be.

“Sweeney Todd” is one of my absolute favorite musicals, and I’m just so happy I’m now old enough to be playing Mrs. Lovett.

Our actual first rehearsal days were in mid-August to give ourselves a head start on the music. On Aug. 12 and 13, our ensemble tackled their tracks, and on Aug. 14, the principals got together for solos and duets. One ensemble member, who shall remain nameless, was so confused from rehearsing the Act II opener that all that person could say was, “God is good,” which still has most of us laughing hysterically, both from the boo-boo and the resulting mental fatigue.

It’s always an exciting thing, embarking upon something fresh and new. A couple of friends I told regarding working on this particular show expressed their excitement.

Theater star Michael Ball, who played Sweeney in the last West End production with Imelda Staunton as Mrs. Lovett, said, “Yes, it’s hard, but once you get it, it never leaves you.” That stayed with me, and I shall carry that as I navigate through the show over the next few weeks.

This show will be a perfect accompaniment to Halloween, because of its grisly and frightening premise.

According to Bobby Garcia, Stephen Sondheim had only one intention in creating this musical: to scare people.

So please come to our show prepared to be scared. We’ll only be too happy to oblige. We open shop on Oct. 11 and sop up the last bits of pie on Oct. 27.

To everyone who came to Resorts World Manila’s anniversary celebration “Perfect Ten,” thank you very much for spending last weekend with us! To Michael K. Lee, Tanya Manalang, Esang de Torres and Nicole Chien, thank you for generously sharing your singing voices and huge hearts with everyone. To Gerard and the ABS-CBN Philharmonic Orchestra, your gift of music is something I’ll personally never tire of. To our designers Rajo Laurel, GA Fallarme and Rards Corpus, thank you for creating fantastic environments. And to our producers Resorts World Manila, Full House Theater Company and Ultimate Productions Inc., thanks for taking care of us.

And last but not the least, to Floy Quintos for helming an amazing night. I also thank you for the conversations in the quiet of the night, about art, theater and performance.

I’ll be carrying all that with me from here on out.