Sharon Cuneta on her nannies' use of uniforms | Inquirer Entertainment 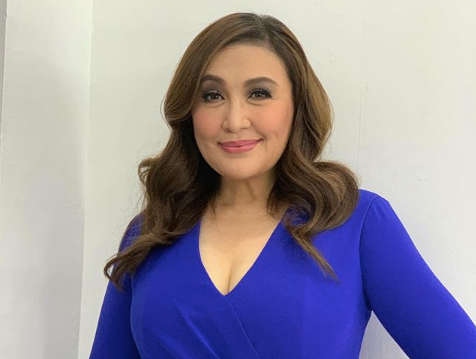 Sharon Cuneta defended her choice of having her nannies wear uniforms when out in public places after receiving criticism for it.

The Megastar’s response came after a netizen, one @itsmemialyn, expressed her disagreement with Cuneta’s choice, after the actress posted a picture last Monday, Sept. 2 on Instagram of her and her staff eating in a restaurant. Two of Cuneta’s employees wore their uniforms while they dined out.

(It is not nice that the nannies are wearing uniforms in public. Nannies should not have uniforms.)

Cuneta replied to the remark, saying, “I’m so sorry you think that way. I guess if I have to explain it to you pa, that means you won’t understand.”

She explained that when the nannies travel with Cuneta and her family abroad, such as the United States and Europe, the actress does not require them to wear uniforms. 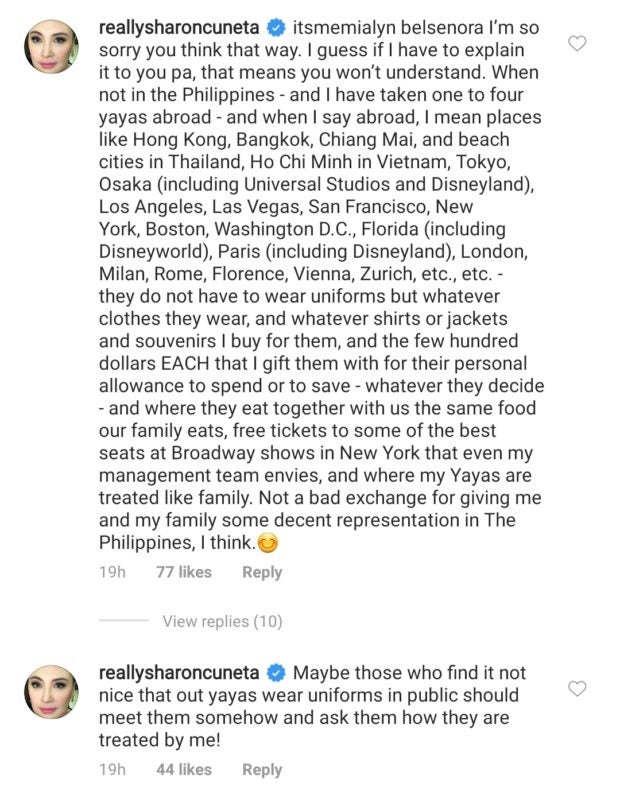 Cuneta stressed that their domestic workers are treated like members of the family, and even receive perks like “some of the best seats at Broadway shows in New York.” She also brings her driver of over 30 years, Nelson, whom she fondly calls “Dodong”, in her travels abroad.

“Not a bad exchange for giving me and my family some decent representation in the Philippines, I think,” Cuneta said.

“Maybe those who find it not nice that [our] yayas wear uniforms in public should meet them somehow and ask them how they are treated by me!” she said in a separate comment.

Cuneta also agreed with the points made of one Instagram user, a certain @cxcgurl. The netizen claimed that nannies would feel “depressed” when wearing a T-shirt while their boss wears brands such as Gucci. According to the Instagram user, the nanny “will take pride of her professional appearance in the uniform.” The actress thanked the netizen for “understanding and being broadminded.”

Another Instagram user, one @hardiv65, defended the use of uniforms as well. She pointed out that wearing them helps the nannies save money since they would not need to spend on clothes to wear for work. Cuneta echoed the statement, saying, “Again, correct!”

Meanwhile, one @roseydoseyus aired her opinion on Cuneta using the term “yaya.”

“I don’t think yaya is a nice word for it. Guardian sounds better [don’t] you think?” she said.

Cuneta then explained that “yaya” is an affectionate term for her and her family. She revealed that they call their “all-around” helpers “yaya,” even their cooks and laundrywoman.

Cuneta was previously in New York City with some of her helpers who assisted in her daughter Frankie Pangilinan’s move into her college dormitory in the city. NVG