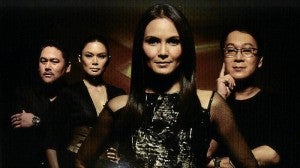 After A nationwide audition that attracted more than a hundred hopefuls, the field is down to 15 fashion designers who will contest the top spot on “Project Runway Philippines.”

The reality show premieres tomorrow at 8 p.m. on ETC (Channel 9 on free TV, 14 on Sky and Destiny). Their fate will be decided by a panel of judges headed by Rajo Laurel and Apples Aberin, with Jojie Lloren as mentor.

Each week a guest judge will join Rajo and Apples to render the  decision. For the first show, Inno Sotto will be the third judge. Hosting the show is supermodel and fashion entrepreneur, Tweetie de Leon-Gonzalez.

The 15 finalists come from all over the country, and from different backgrounds. There’s an ex-seminarian, a Muslim, a visually impaired individual, a former banker, a Physics major, and a call-center agent.

Normanie Santos, 28, is the ex-seminarian. After a few years inside, he realized that he didn’t want to be a priest. He turned to friends who taught him the art of jewelry-making and eventually, he found himself designing clothes.

Fatima Guerrero, 21, is the Muslim contestant. She’s pursuing a degree in fashion arts. Glenn Gonzales, 26, is visually impaired. He only has one good eye due to congenital glaucoma.

All 15 entrants were at the launch of the show last Monday at the Genting Club. There was a preview of tomorrow’s premiere episode, but they didn’t show the final portion when the judges decide who’s leaving the show.

Visually, the first episode proceeded like an action drama. French director Henri de Lorme has 5,000 hours of video that he has shot with the use of seven cameras, running 20 hours each day.

After tomorrow, only 14 will be left, and each week, one designer will be asked to leave until only one is left standing. Among other prizes, the winner will get half a million pesos, sewing machines worth P300,000, and an all-expense-paid trip to Paris for Fashion Week.