BTS’ ‘Bring The Soul’ delves into blood, sweat and tears of stardom 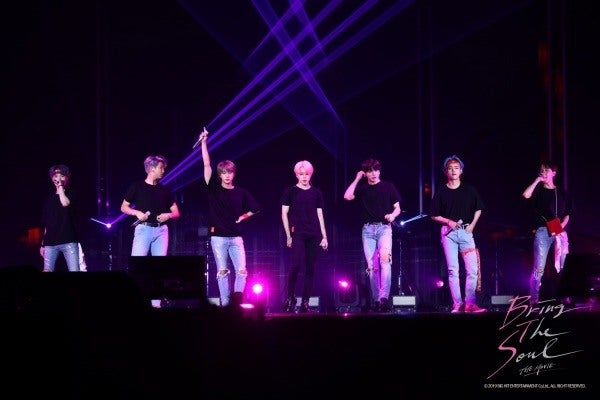 SEOUL — During BTS concerts, fans and the audience get to witness a heart-thumping performance, unyielding passion, intense choreography and electric songs, testament to the septet’s immense popularity across the globe.

But what really goes behind this dazzling stage is usually less revealed, though BTS makes sure to drop plenty of candid photos on social media and short unscripted clips, called “Bangtan Bomb,” keeping in touch with its loyal fandom known as Army.

BTS’ latest concert documentary “Bring The Soul: The Movie” does just that. It gives viewers a glimpse into the making of BTS’ “Love Yourself World Tour,” across 11 countries, including South Korea, US, UK, France and Japan, from August last year to April. At 105 minutes, the film not only highlights their iconic performances around the world, but also features all their blood, sweat and tears — both literally and figuratively — of stardom, reminding us that big wins are hard fought. It is their hours of practice, traveling on long-haul flights, adjusting to new cities and beds every week, grappling with unexpected injuries and immense pressure before performances that are behind the curtain.

On concerns that the film is another mash-up of concert clips — that fans have already watched many times — and behind-the-scenes footage, the film, directed by Park Jun-soo who is behind BTS’ previous film “Burn The Stage,” does bring some new narrative. Through flashbacks, the film chronicles the extensive tour with the special scene taken from a rooftop restaurant in Paris the day after the band completed the European leg of concert, where members enjoy good food and wine and recollect their unprecedented journey.

It’s definitely a great film for fans, but also for anyone to watch — even those that may not be as familiar with the K-pop phenom and what’s all the hype about. Because the documentary is edited effectively — in mind of a broader audience — mixing tear-jerking, hilarious, intimate and heart-to-heart moments of the members that show their inner dynamics between the music, while trying to stay away from being too melodramatic.

The film, produced by Big Hit Entertainment and A Camp Entertainment, has already broken records as the widest ever worldwide release in 110 countries.

But one thing I hoped was more emphasis on their unique path and in-depth touch in their Parisian dinner table dialogues, as well as other individual moments throughout the flick. Though it is understandable due to privacy, it would have been more meaningful if the film delved deeper into members’ thoughts and insights that weren’t explored before. Because BTS’ world tour is not another string of concerts that many K-pop acts go on, but a unique journey as it broke into the mainstream Western music market, blazing a trail that no K-pop band has done before. The dinner scene was joyful with fun bits and pieces, but it felt like another stop the members had to make during their packed concert schedule. I do think they deserve more.

I watched the film on the day of the premiere on Wednesday at the special screen called “Jeon Jungkook Theater” in CGV Yongsan, central Seoul. The entrance of the theater is decorated with images of BTS’ youngest member through Sept. 4, in celebration of his 23rd birthday prepared by fans.

Many fans arrived early before the showtime, to take pictures in front of the theater, with some wearing BTS clothing and merchandise, and carrying the glowing “Army Bomb” — the band’s official light sticks connected via Bluetooth. 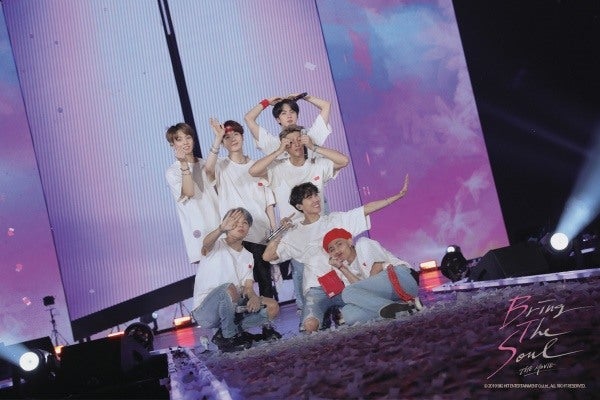 During the singalong screening, viewers were part of the concert audience. The filmgoers clapped after each performances, sang along to many hit songs, including “Fire,” screaming when the boys make a grand entrance, laughing when members crack a joke or Jungkook and Jimin imitating J-Hope, awestruck when Jin carries around his own character doll RJ all the time on the plane ride.

The Seoul rendition was completed with RM’s final say. “Since we are at the main (Olympic) stadium and we don’t know when we will return, there is something I really want to try,” said the BTS’ leader. “Let’s hug together,” he said, hugging each other on the stage.”

Just like RM’s moment, the film feels prophetic throughout. During their stop in Los Angeles in September, BTS visited the Grammy Museum. While looking around the place, J-Hope said, “We want to go to Grammys,” which came true five months later in February, when the band was invited to present the award for the first time as a K-pop band at the music’s prestigious night.

The band completed the tour with the US leg at the Citi Field in New York City in October, saying that “their US tour is over, but their stadium tour has just begun,” exactly forecasting its colossal stadium tour that made BTS return to the stateside seven months later.

The film depicts rigorous demands of a world tour throughout, as members doze off in-between nonstop schedules and some perform despite their physical pain. Junkook suffering pain after injuring his heel right before the concert at London O2 Arena was hard to watch, as well as V breaking down in tears at Paris concert for not being able to sing much due to cold and sore throat and Jimin’s severe muscle pain.

And it does leave viewers wondering how can this 20-something men bear such a weight and as superstars and their impossible schedule. What makes them go on? First it’s the fans. Throughout the film, the members make sure to thank them for their support and waiting for them, with V shouting “I love you more than yesterday, but less than I will tomorrow,” in French during the Paris gig. And second is the belief that they can spread a positive influence. The members are well aware that their larger-than-life fame does come with many glorious moments and opportunities, but also responsibility.

“Through this ‘Love Yourself’ tour, I’m finding how to love myself,” said RM. “It was never intended but it feels like I’m using you guys to love myself. So I wanna say something. Please use me, please use BTS to love yourself. Because you guys help me learn to love myself, every day.”

Make sure to stay for the post-credit scene.

Read Next
‘Every body is different’: Andi Eigenmann on losing postpartum weight
EDITORS' PICK
Notice of 2020 regular meeting of stockholders June 18, 2020
SM prepares for ‘safe malling’
Leveling up your ‘lutong bahay’ with the kitchen companion you never knew you needed
NBI, Immigration to join hunt for ‘underground’ medical clinics
2 Chinese nationals arrested in raid on another unlicensed COVID-19 hospital in Pampanga
P2.2 trillion in losses: Cost of COVID-19 impact on PH economy
MOST READ
Revillame tells Roque: ABS-CBN is in my heart despite being in rival network
NCR is ready for GCQ — Palace
LOOK: Robredo, Vico Sotto, check Community Mart ops in Pasig
Año: Quarantine passes not needed in GCQ, movement restricted to essential travel
Don't miss out on the latest news and information.