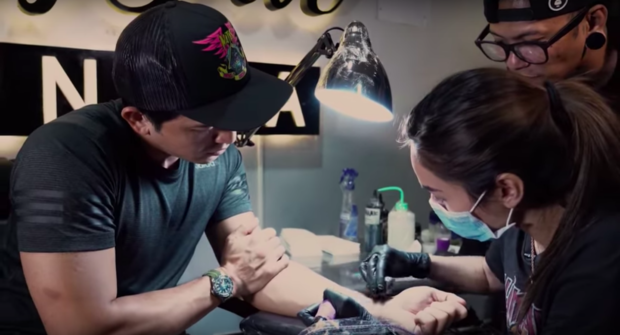 Jennylyn Mercado learned how to apply tattoos recently, with her first client being none other than her longtime boyfriend Dennis Trillo.

The actress picked up the basics of tattooing at a tattoo parlor in Maginhawa, Quezon City, as seen in her vlog on YouTube last Tuesday, Aug 20.

When she went to the tattoo parlor, 55 Tinta, she sat down with professional tattoo artist Oskie Esguerra to discuss the basics of tattooing.

Esguerra taught the actress the whole process of applying a tattoo. He demonstrated how to operate the tattoo machine and how to properly treat a tattoo after a session. He also asked her what design she had in mind. In response, Mercado showed a simple cat design, an outline that did not need any details such as colors and shadows.

After the short talk, Esguerra told Mercado she was ready to give tattooing a try and that she only needed to find someone to tattoo. Upon hearing this, she was obviously surprised saying, “So okay na ako? Yun na yun? (So I am okay? That is it?)”

Finding someone to agree to be tattooed by a first-timer proved to be no easy feat. Mercado was turned down by customers at the parlor one after the other. After her unsuccessful attempts, Trillo volunteered to be her first client.

When Trillo asked about what design Mercado had in mind, she showed him her drawing of a cat. But she then changed her mind and told him she wanted to do a more elaborate design.

She did a rough sketch on Trillo’s left shoulder using a ball pen to explain how she wanted to add on his current tattoo of a sun. Mercado said she wanted to add clouds surrounding the sun and a family beneath it.

After Trillo positioned himself in the chair for the session, the actress started to apply the tattoo on his left wrist. During the process, Mercado could not hide her nervousness. “I’m so scared!” She said while drawing the design on her beau.

Throughout the session, Esguerra continued to coach her. Trillo remained supportive of Mercado as he did not complain or express any discomfort while she inked him.

After successfully applying the tattoo, Mercado revealed that it took her 13 minutes and 59 seconds to complete the design.

Mercado’s try at tattooing is part of her series of vlogs entitled “Jen Survives” where she undergoes different challenges. Her recent challenges included performing undercover at an LRT station and playing the computer game “Counter-Strike”. JB