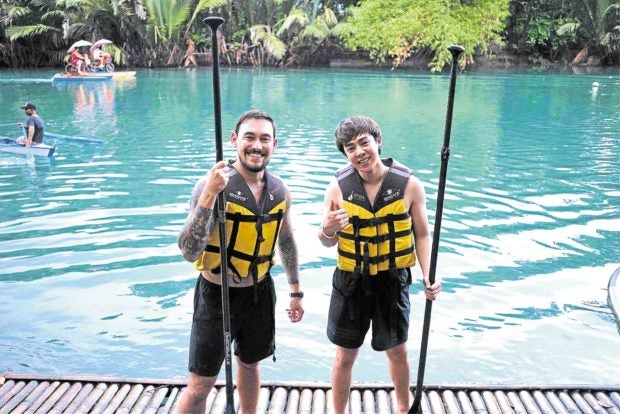 Paul Foster (left) and Alexander Lee in “No Sleep, No FOMO”

There are a lot of reality shows that push participants beyond their limits.

For instance, Alexander Lee went cliff-diving, and he had to swim with sardines in a skinny-dipping challenge in the Philippines.

In Thailand, actress-model Taya Rogers crossed paths with a rescued elephant in Chiang Mai, while Kim Jong-kook (of the singing duo Turbo) had to taste snake soup in Hong Kong.

For his part, Eric Nam had to shake off a panic attack when he was tasked to perform a standup-comedy routine in a packed comedy club, then crash a wedding in Malaysia, while actor-singer Nat Ho had to venture inside an abandoned amusement park in South Korea.

“No Sleep, No FOMO,” which was shot mostly in the Asian region—including a recent stopover in Cebu, with Alexander Lee—will begin airing on Saturday at 9 p.m. on Discovery Asia.

In our recent Q&A with Paul Foster, the “NSNF” host told us what it was like going on sleepless missions, completing tasks in Cebu and Bohol with Alexander Lee, and eating “balut” (duck embryo):

There are so many travel shows on TV. What sets “No Sleep, No FOMO” apart from other programs of the said genre? What sets it apart is the fact that we have to stay up for 60 hours to complete our 60 FOMO (fear of missing out) missions! All other shows have 60 hours to film, but across five or six days.

For “NSNF,” however, we literally had two and a half days to film, nonstop! We began filming when the clock started, and stopped when the time was up.

How do you choose the locations to go to, and the activities to do? I didn’t choose anything. I was told which country I was going to, along with a FOMO list of tasks to complete.

What was the trip like from Cebu to Bohol with Alexander Lee? How were the Filipinos you interacted with? Are there other places here that you want to explore? It was a pleasure working with Alexander, and I was very proud of how well he did.

The Filipino people are very warm, friendly, happy and welcoming, so it was a big help for us to complete our missions.
My biggest place to visit in the Philippines is the Underground River in Palawan.

I am amazingly struck by the different places we visit. I count myself so lucky to be able to travel and see the world.

It wasn’t the most pleasant eating experience of my life, but I am glad I did eat it—and that’s why I don’t have to try it again (laughs) … 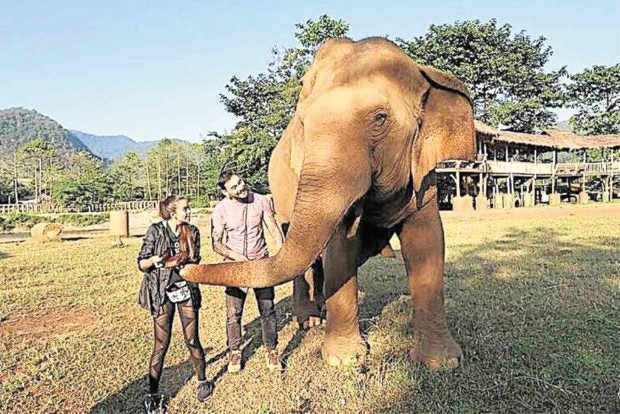 Any other “oddities” or odd experiences during your trips for the show? We had an odd experience at the Haunted Hotel in Bali, but you’ll have to wait for that episode to see what happens.

Has social media helped the show’s visibility? With millennials known for their limited attention span, what do you and your show do to keep them engaged? Yes, social media is definitely a big part of the “NSNF” format. So we used a lot of stories, including polls and questions for fans and followers to help us make decisions during our 60-hour adventure.

Does the show intend to expand its reach outside Asia, since it’s now being seen in the Middle East and Africa? I am not sure about this. But I hope that if they do, they will take me along, too.

Were there troubling or upsetting situations that you encountered during your travels? Not really. Again, the Haunted Hotel in Bali was an interesting experience, but it made great TV for you to watch!

You are a sportsman, an actor and a TV host/presenter. Which do you find most fulfilling? They’re all different, but they are things I very much enjoy. I get fulfillment from all of them, but I would have to say that hosting is what is currently giving me the best of my career and life experiences.

If you’re asked to recommend three places to go to, what would your recommendations be? I recommend Cape Town, South Africa, because there is so much to do there.

Next, Sumba, Indonesia, … to be on the islands. And finally, Ladakh, India, to be in the Himalayan ranges.