Kris Aquino recently asked Lolit Solis if she could negotiate a deal for a new teleserye for her.

Aquino’s request came after Solis aired her opinion on the cancelation of the actress’ entry to the Metro Manila Film Festival (MMFF).

Aquino broke the news of her MMFF entry “(K)ampon” being canceled last Friday, Aug. 16, via an Instagram post. She cited the late request to change the film’s lead actor as the reason for the cancelation.

Derek Ramsay, Aquino’s initial leading man in the film, was set to be replaced by Gabby Concepcion after Ramsay withdrew from the project. But Aquino stated that the deadline to apply for the change was on July 31, and the production group behind the film sent the request only on Aug. 5.

The MMFF executive committee denied the request since it was submitted five days late, as per Aquino’s Instagram post.

Despite the mishap, Solis remained hopeful for Aquino. She said that setbacks are usually for the better.

Aquino assured Solis that she was “chill” despite the recent developments with her supposed return to horror. She then asked Solis if she could negotiate a TV series for her.

(Maybe like how you negotiated Star Talk for me before, you can negotiate with GMA a teleserya, same slot as “Ika-6 na Utos” that we really followed?) 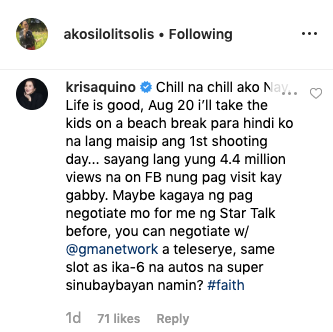 To take her mind off the supposed first day of shooting for the film, Aquino said she will be taking a beach trip with her sons today, Aug. 20.  /ra