Kris Aquino slammed a netizen who left the phrase “the autistics” in her recent post featuring photos of her sons Josh and Bimby.

The netizen’s comment on Aquino’s post has since been deleted, but Aquino reposted her reply to clarify her say on the matter.

“I am replying in an educated way. Why my sons? Especially kuya josh?” Aquino said.

Aquino’s first-born, Josh, is diagnosed with autism. Previously, Aquino opened up about how Josh was bullied for his condition. She also stated how raising a child with special needs is different for each family.

The Queen of All Media did not mince words when she described the Instagram user as a “despicable coward” and an “arrogant fool.”

“I have every right to call you out because you threw the first uncalled for insult,” she added.

She stated that it is people like the said netizen who inspire her to consider running for office.

“To fight for those without a voice, like special children, parents who cannot afford proper healthcare, and marginalized single parents,” she said.

(I never start a fight but you know me. Do not insult my parents or my children if you do not want my fangs to show.)

(It is simple, right? All of you have the same sentiments. When your parents die, do not insult their memory. As for all parents, if their children are insulted, they will all fight back.) 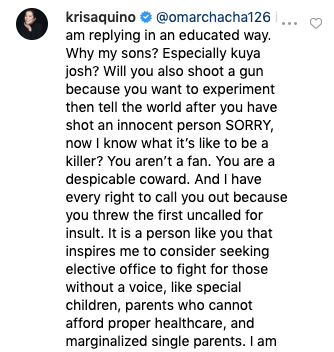 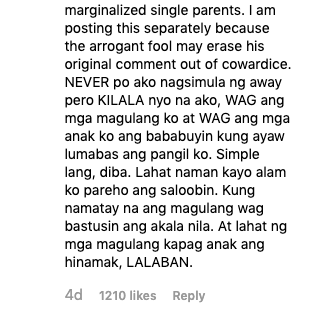 Aquino recently enjoyed some family time with her two sons in Tokyo, Japan. They were joined by one of the actress’ long-time friends, Erich Gonzales, during a portion of their trip. JB

Kris Aquino on Bea Alonzo and Julia Barretto: They ‘deserve to move on’