Acting no longer ‘just a game’ for Jillian Ward 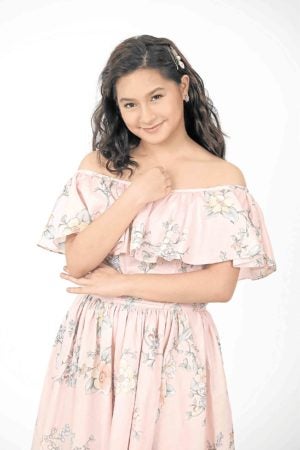 When she first started acting as a 4-year-old kid, Jillian Ward thought show biz was just a game, and the set, her playground. But now, as a 14-year-old young lady, she’s finally starting to see the industry and her career in a different light.

“When I was younger, parang laru-laro lang. Last year, I realized that I was really growing up … that acting isn’t just a game,” she told the Inquirer at a recent press conference for “Prima Donnas,” her new afternoon drama soap on GMA 7. “I now see it as work. But I love it just the same.”

Jillian’s breakthrough television project was the 2010 small-screen adaptation of the 1963 film “Trudis Liit,” which starred Vilma Santos. The following years saw the child star landing one role after another. But sometime in 2014, things began to slow down.

She had reached the dreaded “awkward phase” for a child star. “It was quite tough when I was at that stage, not knowing if I was still suited to kiddie roles. But at the same time, I still couldn’t pass off as a young woman,” she pointed out.

Thankfully, however, GMA 7 still gave her projects during that tricky time in her career. “I still had projects, but of course, they weren’t as big as ‘Trudis,’ because I was relegated mostly to the background,” she said. “But I’m grateful that I still had at least one show each year.”

“I have been in contract with my network since I was 5. I was like their baby, and they watched over me as I grew up. Even if didn’t have shows, they made sure I had guest appearances,” Jillian added.

Now, she’s set to get top billing once again in “Prima Donnas”—her “first breakthrough show as a teen actress”—which starts airing on Aug. 19. “I have become more mature—not just personally, but also in terms of acting. I hope to show that to the audience,” she said. “I’d like to be known for something more than just being ‘Trudis Liit.’”

This time, she’s costarring with two other teen actresses, Althea Ablan and Sofia Pablo. The three play sisters who stand to inherit their father’s business empire. However, the three soon find themselves at the receiving end of the evil deeds and schemes of the company’s managing director, who has her eyes not only on the girls’ fortune, but also on their dad’s affection.

While she’s of the same age as her costars, Jillian is already more experienced when it comes to acting. And once in a while, she does give Althea and Sofia valuable advice.

“I already have an idea about how tough show biz can get. There are always a lot of better, more beautiful hopefuls coming up, so you really have to work hard. I try to help them in that regard,” she related. “I’m very honest when it comes to work, so I also hope to hear some feedback from them.”

“I want to continue improving as an actress. I want to be able to portray different types of characters; try different genres, may it be action or fantasy,” she added.

Aside from acting, Jillian also hopes to pursue a career in music. “I love singing pop songs. I have already recorded theme songs for shows, like ‘Daig Kayo ng Lola Ko’ and ‘Sa Piling ni Nanay.’ But I haven’t had the chance to have my own single yet, which is one of my dreams,” she said.

While she’s thankful for the mere fact that she still gets to do the thing she loves the most, Jillian doesn’t want to stop there.

“I want to believe that I was destined to be an actress. I hope to remain in the industry until I’m old, and I will work hard to make sure I reach my goals,” Jillian said.