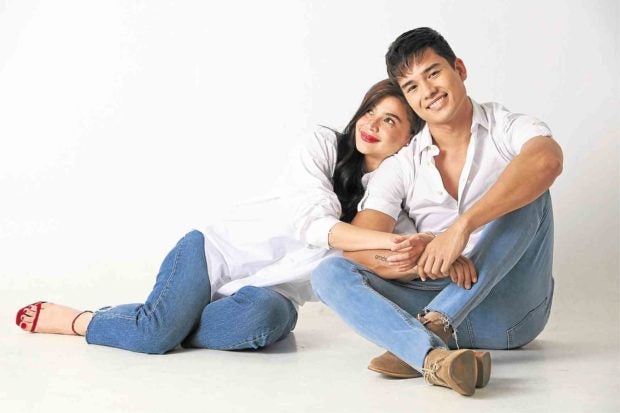 Marco Gumabao was all cool and composed while filming his intimate scenes with Anne Curtis for their coming sexy drama flick, “Just a Stranger.” Or at least he tried to look like it.

But on the inside, admittedly, his “heart was racing.” “Of course, I didn’t want to show anyone that I was feeling nervous, but I really, really was,” he told reporters at a recent press conference for the movie, which opens in cinemas on Aug. 21.
“It was my first [time] doing such kind of scenes,” he explained.

Making things more nerve-wracking for the 25-year-old actor was that his leading lady was Anne, whom he looks up to. “It was a privilege … I couldn’t believe I was paired with her. I was in shock,” he said.

Luckily, Anne helped him feel comfortable during the shoot and even gave him valuable advice once in a while.

While Anne has had more experience in the sexy drama genre, most of her screen partners were more or less her age.
She’s nine years older than Marco, and if memory serves, he’s her youngest leading man so far.

“I find it amusing that I’m now being partnered with younger men. But I don’t mind,” Anne said. “You shouldn’t limit who you can work with as an actress. You always have to be open to working with other people.”

And as the more senior artist, Anne admitted that she almost felt like it was her responsibility to guide her neophyte costar. “I helped put him at ease. It was his first time doing an intimate scene like that. And despite him looking OK, he probably was not,” she pointed out.

“It was a joy working with her. She was kind, genuine, caring,” Marco said, adding that he underwent workshops with Anne prior to shooting. “If I do something off—with my nuances and such—she made sure to point it out. And I listened.”

Needless to say, he didn’t reach the point where he could possibly get carried away.
“I have never thought of it that way,” he said. “I was focused on the emotions of my character.”

But if there’s one—make that six—thing Marco is confident about, it’s his toned physique. “My abs are ready, all six of them,” he jested.

Written and directed by Jason Paul Laxamana, “Just a Stranger” revolves around Jericho (Marco), a charming but immature young man, and Mae (Anne), a woman who has all the material things she needs, but whose marriage has long lost its spark.

The two cross paths in Lisbon, Portugal, then end up in a one-night stand.

While they vow to keep everything a secret, fate leads them back together in the Philippines.

“They know it’s wrong, but they just can’t help it,” Jason Paul said.

While infidelity was one of the film’s main themes, it wasn’t presented in a romanticized fashion, they said.

“It explores what sort of things would have to happen in one’s life for him or her to reach a point where he/she could fall for someone else. In my character’s case, is she getting the same kind of love she was getting in the beginning of her marriage? Then, she meets someone vibrant and lively. That’s the struggle for her,” Anne said.

“But of course, there’s no way to justify it,” she stressed.

“I think finding someone else attractive is normal,” Marco added. “But it’s your responsibility to know and maintain your boundaries.”