JC Santos, costars no qualms about taking clothes off in ‘Open’ 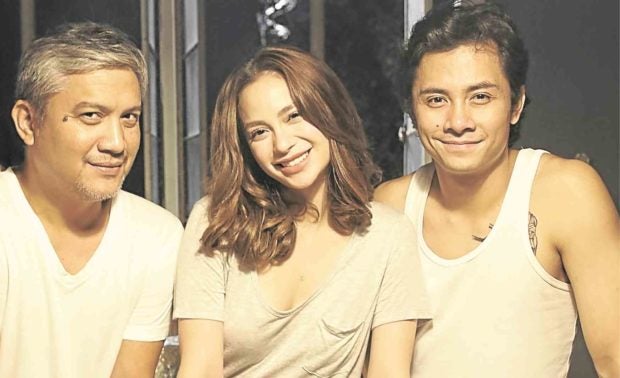 Wearing plaster was too painful for him,” said director Andoy Ranay, who confirmed that actor JC Santos had opted to let it all “hang loose” while working on his sex scenes in their latest movie, “Open.”

“We had to work on several delicate sex scenes, and we were sure that the audience would notice it if we faked it, so JC said [we should] leave it up to him. He promised to be the one to make sure that his privates would not get exposed to the camera,” Andoy recalled, adding that JC did manage to do that, but failed to hide it from costar Arci Muñoz, who was in front of him.

Andoy said the same thing happened while JC was shooting his love scene with another female cast member, Ina Raymundo.
“Since he refused to use plaster, nakita na naman! A member of the production team said one of the cameras caught it, too. But I was looking at the closeup preview monitor at the time, so I didn’t see anything,” he shared with the Inquirer.
Andoy said directing “Open” was made easier for him by the fact that his lead actors had no qualms about taking their clothes off.
“They were told about this consideration when we pitched the project to them. This is Arci’s sexiest role to date. She really transformed here as an actor. I kept telling her that she’s so brave in agreeing to play this character. She listened and really did her homework,” the director pointed out.

“Before the shoot, I told her, ‘Don’t worry. I will respect you. This will be a collab. ’Di kita bababuyin.’ It helped that we’ve already worked together in ‘Since I Found You.’ We can already talk freely about her limitations.”

“I promised my actors that we’d be very careful,” Andoy declared. “When shooting a delicate scene, I made sure we were behind closed doors, with only me, the DOP (director of photography) and the cast members present. I also said that if we’d see anything on camera, it would be edited out during postproduction work.”

Andoy said it was JC’s work in theater that helped him easily shed inhibitions about baring skin during love scenes. “It’s also because he trusted me as his director. We both knew what should and shouldn’t be seen on camera.”

“Open” is one of 10 films showcased in the 2019 Pista ng Pelikulang Pilipino or PPP, which will run starting Sept. 13.

In the film, Arci and JC play Rome and Ethan, respectively. They have been together for 14 years until one of them begins to feel that the relationship has gone stale, and tries to convince the other to explore the idea of going “open.”

Andoy said that while it’s considered a taboo in the Philippines, this is being widely practiced in other countries. “Based on our research, there are Filipino couples who do this but would not freely talk about it. Now is the best time to do this film kasi wala pang gumagawa,” he said. “This is especially common in younger people, those who are even younger than the millennials.”

In the end, Andoy said that how Arci and JC’s characters chose to resolve their issues would reflect his personal view on the topic. “I chose to discuss an issue that society has deemed forbidden. My statement is in the film. Some of those who got to see it said it’s too feminist. I probably am a feminist—what you’ll hear there is really my voice.”