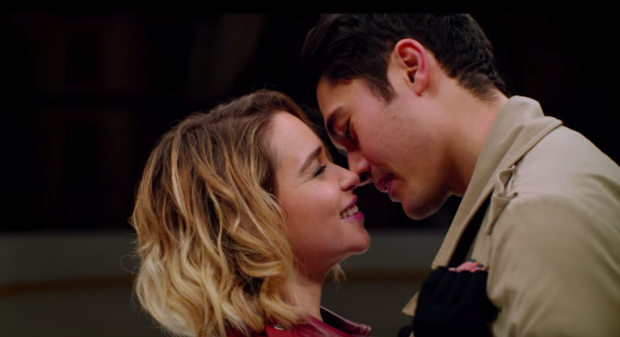 Emilia Clarke and Henry Golding are starring together for the first time. Image: Screengrab from YouTube/Universal Pictures

In “Last Christmas”, Emilia Clarke, who was revealed through her turn as Daenerys in “Game of Thrones”, will be playing her first romantic comedy role. On Tuesday, Aug. 13, Universal Pictures released the first trailer for the film, which will hit theaters on Nov. 8, in time for the holidays.

In “Last Christmas”, a reference to the classic song from 1980’s group Wham!, Clarke plays Kate, a young woman who works in a Christmas store. Cynical and demotivated, she is drifting through a passionless life. One day, her boss (Michelle Yeoh), loudly exclaims “I have nicknamed her ‘Lazy the Elf’ because she appears never to work” to a group of customers.

At that point, Kate meets Henry Golding’s Tom, a mysterious young man she will quickly grow close to, opening up to him to the point where she confides that she twice came close to dying, “I was really sick and I nearly died. I do not tell people because they get weird, but I do not think you will get weird,” Clarke confides in the three-minute trailer. “I am just scared all the time.”

The feature, which was co-written by Emma Thompson (who also plays Kate’s mother), was directed by Paul Feig, the filmmaker behind the 2018 film “A Simple Favor” starring Blake Lively and Anna Kendrick.

“Last Christmas” will be Clarke’s return to cinema following 2018’s “Solo: A Star Wars Story”. The upcoming rom-com will also bring Yeoh together with Golding following the global success of “Crazy Rich Asians”, in which they both played lead roles.

The plot of “Last Christmas” hits especially close to home for Clarke. The British actress has revealed that she suffered two life-threatening aneurysms while on the set of “Game of Thrones”. HM/JB

ADVERTISEMENT
Read Next
CMA voters consider whether or not to nominate ‘Old Town Road’
EDITORS' PICK
Mallorca City: Home of Cavite’s finest industrial hub
Gamboa to regional chiefs: Stop jueteng in 1 week or face relief
The fight of the decade: The Gypsy King vs The Bronze Bomber
Gamboa: Let provincial chief deal with Espenido’s ‘gag order breach’
Tokyo 2020 postpones volunteer training over virus fears
Gov’t sends home 30 Filipino repatriates as quarantine period ends
MOST READ
Honda to shut down Laguna plant
LOOK: Heart Evangelista wears ‘Quiapo headband’ at Paris Fashion Week
Mark Bautista on love: ‘She has to be understanding of my situation, that I’m bisexual’
It was DILG that blamed Estrada for Manila’s failure to pass standards – Isko Moreno
Don't miss out on the latest news and information.