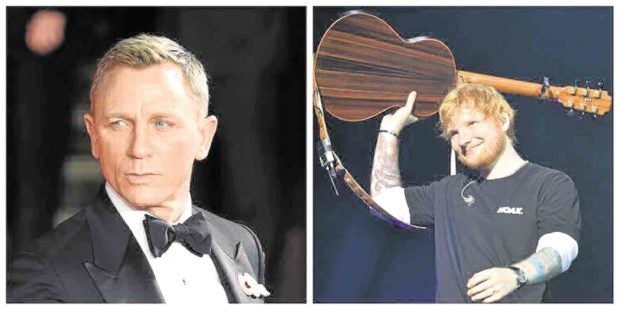 Throughout the years, the “James Bond” film franchise has produced a number of memorable theme songs like “Diamonds are Forever,” “Live and Let Die” and “The World is Not Enough.”

While producers have yet to announce who will be writing or performing the theme for the upcoming installment, lead actor Daniel Craig—who will be playing Agent 007 for the fifth and final time—has revealed his pick: Ed Sheeran.

“Daniel was introduced to Ed’s music by his daughter Ella. She loves Ed, and Daniel now really likes his stuff, too, and wants Ed for the theme tune,” the British newspaper Sunday Mirror, citing an industry source, reported.

“Daniel isn’t just the lead actor on the film, but also one of the producers, so he has huge sway over every aspect,” it added.

Meanwhile, the 28-year-old singer-songwriter, who has just released his latest album, “No. 6 Collaborations Project,” had seemingly expressed interest in writing a Bond theme song as early as 2017. In fact, he already has one.

“I have had a tune written for about three years. I’m not going to say [the title], because someone might steal it, but it’s good,” he said in an interview with the “The Late Late Show” two years ago.

If Ed does land the gig, the pop star will join an impressive company that includes the likes of Shirley Bassey, Tom Jones, Madonna, Gladys Knight, as well as his contemporaries Adele and Sam Smith. —ALLAN POLICARPIO