U2 to rock PH fans for the first time 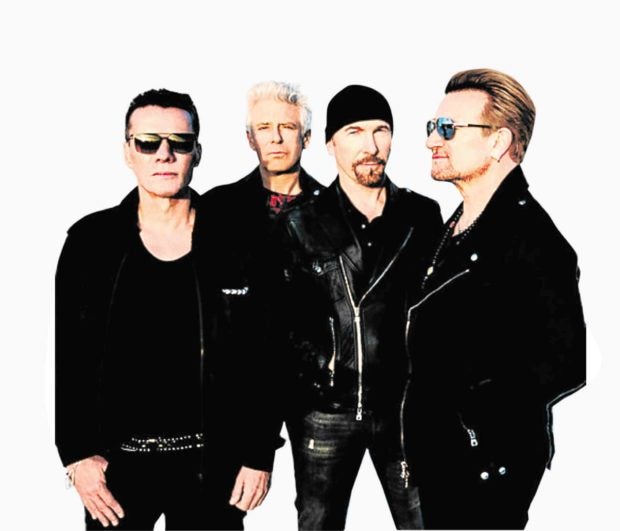 After years of on and off rumors and dashed hopes, it looks like Filipino fans will finally get what they’ve been waiting for.

U2, the seminal Irish band revered for its soaring melodies, distinctive echo-laden instrumentation and politically charged lyrics, will come to rock you on Dec. 11 at the Philippine Arena, according to promoter MMI Live, which is copresenting the one-night concert together with Smart Music Live.

In a handwritten note by U2 frontman Bono, the band—also composed of guitarist The Edge, bassist Adam Clayton and drummer Larry Mullen Jr.—said: “Manila (hearts) U2. U2 (hearts) Manila. Bono, Edge, Larry and Adam are coming to rock you hard and soft, loud and vivid, black and white and color.”

The group’s first-ever Manila show is part of the coming Australasia leg of “The Joshua Tree” world tour, which first hit the road in 2017 in commemoration of U2’s fifth studio album of the same title. The 1987 recording features the enduring hits, “With or Without You,” “I Still Haven’t Found What I’m Looking For” and “Where the Streets Have No Name.”

“Manila is a first … and that has everyone on their toes … this has to be one of the great ones!” Bono said in a statement, adding that the said tour has been “quite a ride” thus far.

The show, which is expected to be divided into three acts, will have the band playing all the tracks from “The Joshua Tree,” plus a selection of fan favorites from U2’s extensive catalog that spans 14 studio albums, like “Beautiful Day,” “Elevation” and “One.”

The stage production and visuals, on the other hand, will feature a “commissioned series of haunting, evocative films” from Dutch multimedia artist Anton Corbijn, who also crafted artwork for the album.

“It has only taken me 30 years to learn how to sing these songs, and it’s great to be able to say that I have finally caught up with the band. Our audience has given the Joshua Tree a whole new life,” Bono said of the tour, which has been praised by critics as “striking,” “confident” and a “triumphant experience.”

“Doing these shows has been very special for us, a lot of emotions, from the despair of how relevant some of the dark songs still are, to the joy, pure fun of the staging … it’s quite a ride,” the 59-year-old musician-activist added.

The Edge, meanwhile, said he and the rest of the band “really wanted” to bring the tour to Asia. “We had always hoped that it would include a show in the Philippines, and now we can finally say that we will see you in December,” he said in the same statement. “We’re excited.”

Formed in Dublin, Ireland, in 1976, U2 is one of the most acclaimed and bestselling acts of all time, with 22 Grammy awards to its name and about 170 million records sold worldwide. U2—which has influenced a number of other artists—is a Rock and Roll Hall of Fame inductee and also ranks 22nd on Rolling Stone magazine’s 100 Greatest Artists of All Time list.