HONG KONG – Hong Kong director Ann Hui will be honored for her life’s work at the Asian Film Awards on Monday, in recognition of classics such as “Song of the Exile”. 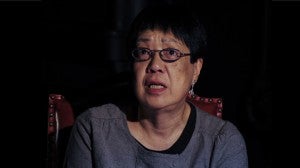 Hong Kong-based movie director Ann Hui’s interview in a hotel in Hong Kong on February 10, 2012. Hui, Hong Kong's most famous director, will be honored for her lifetime achievements at the Asian Film Awards on March 20 in recognition of classics such as "Song of the Exile" and "The Way We Are". AFP PHOTO / Antony DICKSON

Hui, the first female director to receive the Lifetime Achievement Award from the Hong Kong International Film Festival Society, is widely regarded as a pioneer of the southern city’s New Wave of the 1970s and 1980s.

“Once you reach a certain age, you have to receive lifetime achievement awards,” the 64-year-old joked in an interview with AFP ahead of the ceremony in Hong Kong’s harborside convention center.

“But I can’t afford to retire, so it puts me in a difficult situation. I’m feeling really honored though.”

Hui has churned out classic after classic in more than 30 years as a filmmaker, in a career which began with television dramas for Hong Kong station TVB and bloomed with her first feature film, “The Secret”, in 1979.

Born in northeastern China’s Liaoning province to a Japanese mother and Chinese father, Hui lived in Macau until she was five and then moved with her family to Hong Kong.

She studied at the London International Film School before returning to Hong Kong to start her career, an experience loosely re-told in one of her most important works, “Song of the Exile” from 1990.

The film tells a story of disorientation and loss of identity as a young Chinese woman leaves her studies in London and comes back to Hong Kong to learn about her Japanese mother’s past and her own troubled childhood.

Her most recent work, last year’s “A Simple Life”, received worldwide acclaim with its heart-warming tale about the relationship between a young Hong Kong man and the servant who raised him.

Deanie Ip won the Best Actress Award at the 68th Venice International Film Festival for her role as the loyal servant.

“The films I’ve made that have been based on Hong Kong have been my best.”

She said she felt a responsibility to make a “record of the culture and heritage” of the city she lives in, rather than “worrying about whether a story works commercially”.

In her early years, Hui gave breakthrough roles to actors such as Chow Yun-fat and Andy Lau, both of whom have become international stars.

“I feel like the past few years, my films have been received well because Hong Kongers seem to be more conscious and sensitive of their identity. I feel like there has been more appreciation,” she said.

Hui is less appreciative, however, of those who connect her gender to her success.

“Maybe it was because television and film were different. There were more women working in television than men. There was no split in terms of work — everyone was considered equal.”

She said there was no need to point out her gender in order to “raise the status of women”.

“An ideal situation would be to not mention whether a movie was made by a man or a woman, but I guess we still haven’t achieved equality between the genders.  I think once we reach a more desirable stage, then gender won’t be mentioned.”

“An ideal situation would be to not mention whether a movie was made by a man or a woman, but I guess we still haven’t achieved equality between the genders.  I think once we reach a more desirable stage, then gender won’t be mentioned.”