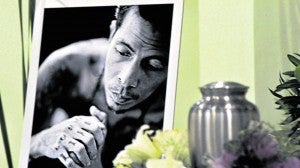 THE LATE Karl Roy in a pensive pose; beside the photograph is the urn containing his ashes.

In the early 1990s, Joey “Pepe” Smith was about to finish a lackadaisical gig at the Music Museum when, out of nowhere, Karl Roy jumped onstage to jam on “Balong Malalim.” Suddenly, the place shook with electrifying energy – thanks to Karl, who later said he had just been sitting in his car, heard the show being broadcast on NU 107, and felt he should  rush over and join Pepe.

Things moved that fast in Karl’s world. He was 22 when he found his calling as a rock singer. In no time he became famous as a live wire act, one of the best to emerge from the local alternative music scene. He was restless, joining the band Advent Call and then quitting to form P.O.T. and, later, Kapatid.

The rock ’n’ roll life apparently took a toll on his frail body. In 1997, he had a bypass surgery at age 28. In 2007 he suffered a stroke that paralyzed his right arm. Tuesday last week he passed away after two days in the ICU of Cardinal Santos Hospital in San Juan. Karl’s manager, Pam Lunar, said he died of cardiac arrest. He was 42.

At his wake Friday night at the memorial chapels of the Shrine of Our Lady of Mount Carmel in Quezon City, family and friends gathered not to grieve, as his younger brother Kevin had requested, but to celebrate Karl’s short but eventful life. 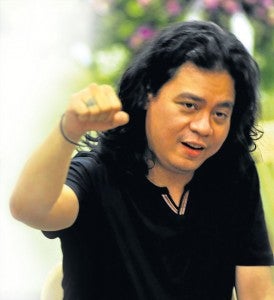 RAZORBACK frontman Kevin Roy on his big brother: “He was my first idol.”

“He was my first idol,” Kevin told the Inquirer. “I was 14 when I started going to clubs to watch him perform … Minsan sasama ako sa Olongapo, then I’d miss school the next day.”

Kevin would follow in Karl’s footsteps by becoming a singer himself. “He told me that I had to step up and be different,” Kevin recounted. At the time, the band Razorback was said to have asked Karl to be its lead singer after Jose Mari Cuervo quit.

But Karl instead asked Kevin if he wanted to audition, which thrilled the latter. “Karl said, ‘On one condition – don’t borrow my clothes, don’t dress like me, you be your own man.’ We had a healthy competition. We were critical of each other’s work.”

Asked what he learned from Karl, Kevin said: “How to sing with power … How to taunt the crowd and command respect. He could do whatever he wanted and people loved him.”

Nitto Palacios was Advent Call’s manager when Karl came in as its new singer. In an e-mail from Australia, Nitto told Inquirer: “Karl was a wild spirit with a most gentle soul. I think he was happiest when he performed onstage. It was his nirvana. The best moments of Advent Call’s career were when Karl was our lead vocalist.” 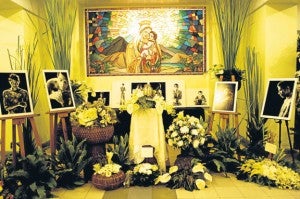 SHORT but eventful life: “I want people not to grieve, but instead celebrate Karl’s life,” said Kevin.

Karl was arguably one of a handful of Pinoy rock vocalists who could genuinely excite an audience with boundless, infectious, manic energy. Perhaps only Bamboo Mañalac, Binky Lampano (before he migrated to the United States) and Chickoy Pura (during the punk phase of The Jerks) could seriously challenge Karl.

Lampano, also in an e-mail to the Inquirer,  said: “I have great respect for Karl as a performing artist. [He had a] magnetic presence onstage, where he was always in his element. His timing was impeccable. All the rock ’n’ roll aside, he was really classy and soulful. The last time I saw him was in the late ’90s during Lampano Alley’s run at the Hobbit House; his band was really happening.”

Pura sent a text message: “Karl was a gem of a singer. I had the honor of performing with him. He’s always been respectful of The Jerks and I thank him for that … To Karl, thanks for the music and your passion. Rest easy, little brother.”

Stephen Lu, former frontman of The Runaway Boys and Rizal Underground, and who helped Karl record songs, said: “My fondest memory of Karl was during the recording of demos for P.O.T. in my Cubao studio. He wrote his lyrics on the fly, doing a couple of takes for each song … It was a great experience working with a magnificent artist like him.”

Color It Red lead singer Cooky Chua, who sang backup on P.O.T.’s debut album, “Yugyugan Na,” recalled: “He was fun to be with, but at the back of my mind I worried about him. I won’t forget the times when we would drink and he sought advice on how to manage his life.”

Former Rivermaya manager Lizza Nakpil, who’s currently handling Wolfgang, reminisced: “I was not prepared to see a towering inferno of talent and almost fell off my seat when I first saw Karl onstage. He was no doubt an original.”

Guitar hero Wally Gonzalez of Juan de la Cruz Band fame was terse: “He was a great singer. We will surely miss him.”

But as much as Karl was a consummate performer, his recorded work fell short of fulfillment. Before leaving Advent Call, he had written a potential hit, the ballad “Puting Ilaw,” which he unfortunately failed to record.

His stint with P.O.T. yielded the party-rousing funk anthem “Yugyugan Na,” but it was a cover of a 1977 composition by another Pinoy band, The Advisors.

Although he recorded two albums with Kapatid, these did not create wide attention. With his death, there could be renewed interest in anything that Karl may have nailed down in the studio. In fact, he was said to be aiming for a comeback, having formed a new band. “He had recorded five songs and he wanted to finish the album,” Kevin said. “Five more songs were left behind. I have offered to do the vocals to finish it, I don’t know if his band will say yes.”

Asked if he thought Karl had taken his health for granted, Kevin said, “He knew what he was doing. He loved every moment … I only wish I had spent more time with him … who would’ve known he would go like this … so fast.”