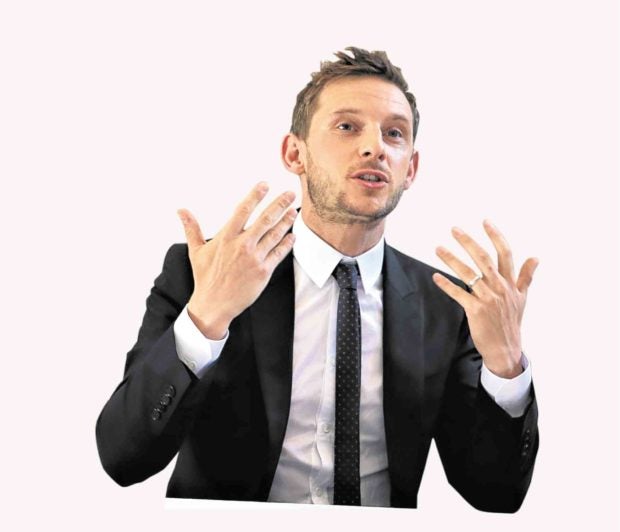 LOS ANGELES—“First of all, it was a joy to work on that film (‘Rocketman’) after doing something like ‘Skin.’ It was quite nice to just go sing and dance for a bit,” Jamie Bell said about the two films he shot back-to-back.

While he shot “Skin” (for which he is earning acclaim) first, “Rocketman,” in which he memorably played Elton John’s songwriting partner, Bernie Taupin, was released ahead of the dramatic film.

“Rocketman” is a worldwide hit, with many filmgoers now curious about Bernie, thanks in part to Jamie’s portrayal of the composer who provided the all-important lyrics to Elton’s music in such pop classics as “Tiny Dancer,” “Your Song,” “I Guess That’s Why They Call It the Blues,” “I’m Still Standing,” “Candle in the Wind,” “Don’t Let the Sun Go Down on Me” and “Skyline Pigeon.”

“Skin” couldn’t be a more different film than “Rocketman.” Jamie Bell is compelling in the lead role as real-life skinhead group member, Bryon Widner, who is now reformed. It’s the first American feature film of Israeli filmmaker Guy Nattiv, who won an Oscar best live action short film award for “Skin,” which is not related to the feature film.

Jamie, who has come a long way from playing the title role in “Billy Elliott,” looked dapper in a black suit and tie in this interview in West Hollywood. He has a daughter, born last May, with actress Kate Mara. 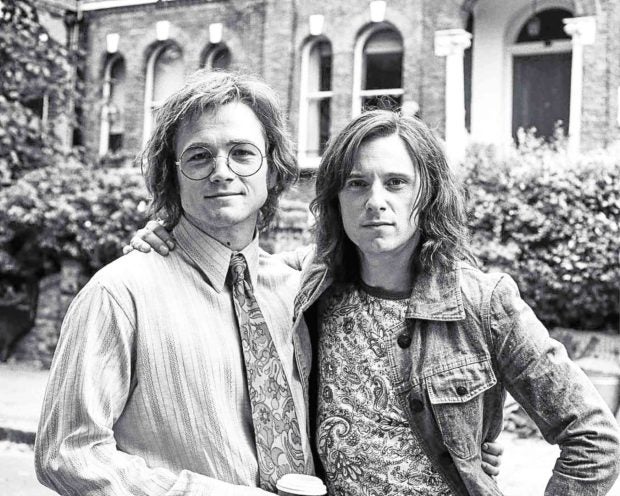 “It was a joy to bring this friendship to life and give it, hopefully, some kind of lasting legacy,” Jamie Bell (right) on playing composer Bernie Taupin to Taron Egerton’s Elton John in “Rocketman.” —Paramount Pictures

What will you remember most from your “Rocketman”? I listen to Elton’s music all the time. That’s because of doing this film. And from getting to hang out and spend time with Elton and Bernie, as well. I could text him just like the other day.

It was a joy to bring this friendship to life and give it, hopefully, some kind of lasting legacy. People can see this amazing bond and collaboration that is quite extraordinary. Just getting to dive into that man’s life, and what an extraordinary life it is.

The movie and your portrayal of Bernie Taupin made many people want to know more about him. Do you keep in touch with Bernie? Yeah, I texted him today. I said, “Did you feel that earthquake (here in Los Angeles)?” He said he didn’t. I said, “Oh good. Was just checking in.” Bernie is lovely. He is a conundrum. He has his own story that is just as complex, rich, wonderful and full of ups and downs as Elton’s. Possibly less flamboyant, I would say. Bernie and his wife, Heather, are both great.

I hope that people all over the world know the name Bernie Taupin, what he’s contributed to music, and that he’s an astounding poet. I do find great irony that he has an art studio now.

He mostly does artwork and painting, and he considers himself a sculptor. If you remember the song, “Your Song,” he wrote, “If I was a sculptor, but then again, no.” And now, of course, he is one (laughs)! And I just love that irony.

In one scene when Elton and Bernie were quite young and just starting their careers, Elton came on to Bernie. Did that happen in real life? They’ve both gone on record saying that it did happen. Elton did make a clumsy pass at Bernie, and Bernie was very understanding and caring about it.

If a movie were to be made focusing on Bernie’s life, would you like to play him again? Totally, I would definitely do a Bernie movie. I’d want it to be done, because you know Bernie had a solo album, right?  (He actually had seven albums.)

There’s quite a story there. I didn’t research that segment of his life, because by then, he and Elton have broken up. Bernie decided he was going to be the front man of his own enterprise. 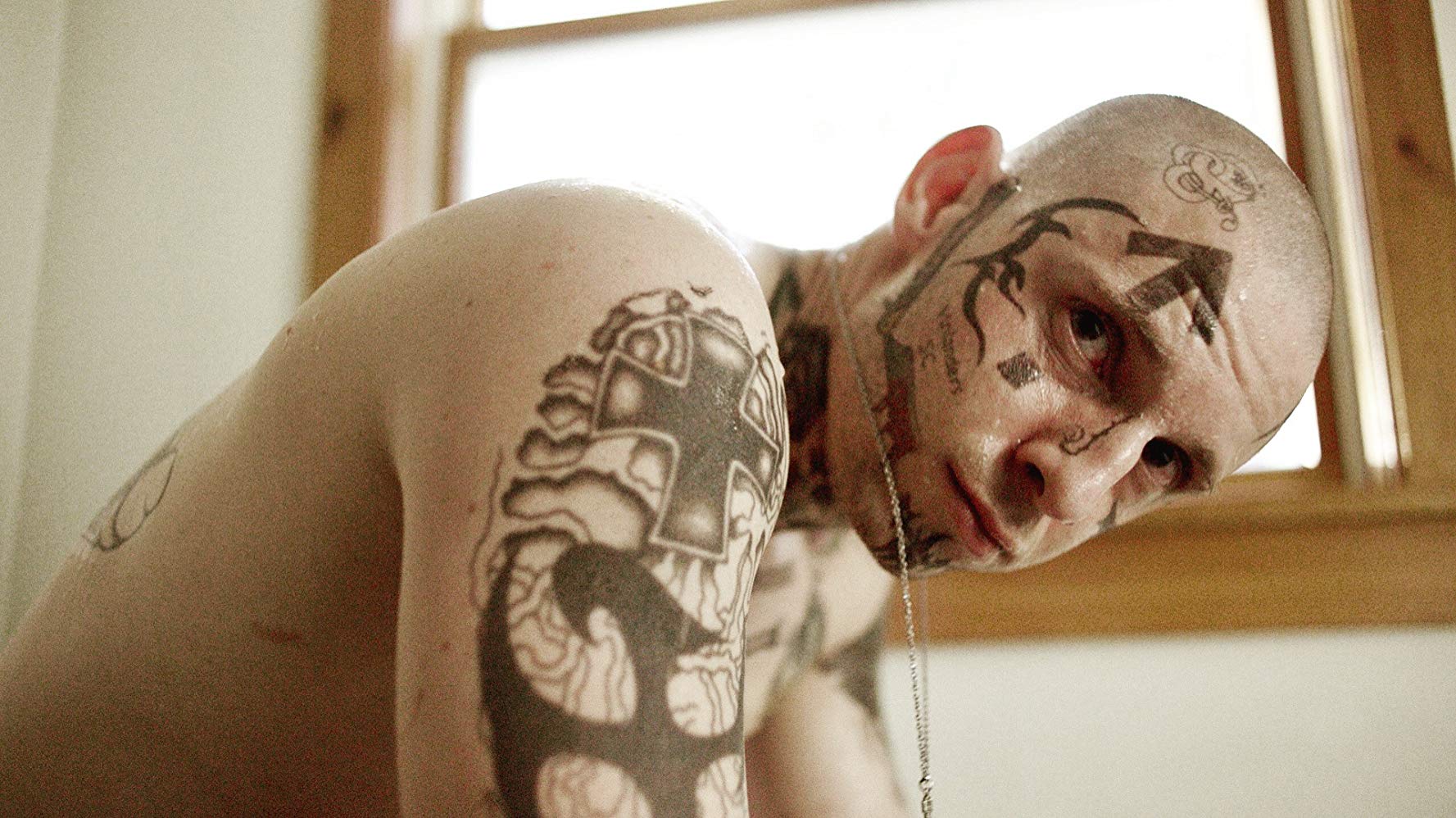 In “Skin,” Bryon’s relationship to Julie (played by Danielle Macdonald) put him on the right path. How did your own relationship and marriage to Kate Mara calm you? First of all, I’m a major procrastinator and intensely disorganized (laughs). Kate is literally the opposite of that. She runs a tight ship. And I need that structure. I appreciate that someone is teaching me how to do that, because I’ve been acting for my entire life.

In this movie, we see how parents mold their children. How does Kate help you become a better man? I think all women make men better. My mom certainly made me a better man. She raised two kids single-handedly. I never met my father. The roles of Bill Camp and Vera Farmiga in this movie—they’re not Bryon’s biological parents.

So, the role of parenting, is everything. When Bryon sees Julie, he sees this fire in her. For me, personally, I see a single woman raising kids. I have enormous respect for that because that’s what my mom did. If I empathize with my character at all, in any way, it’s that lack of a strong male role model.

How much did you know about skinhead and white supremacist groups? Unfortunately, quite a lot, especially these days and these times. It’s hard to ignore it. For example, the first time that I actually talked to Bryon, that I contacted him, was on the day of Charlottesville (Virginia, where a white supremacist group rioted, in 2017).

Do you remember how you felt when you put those tattoos on for the first time and saw yourself in the mirror? When I first put them on, I didn’t believe that I could play this part. I have these big ears (laughs) … [that] communicate to an audience a sweetness almost, something quite childlike in a way. Not threatening at all.

So, we tried so many things. We tried these attachments to try and literally glue my ears to my head (laughs). We tried to paint it out, but we didn’t have the budget to digitally paint it out.

So, I was like, “OK, so I need to change something else.” So, we put contact lenses in. We molded Bryon’s actual teeth; we fit them to my mouth. I shaved my head completely. And when I looked, I was like, “Oh wow. This man, it’s a shock.”

This man is a cold-blooded, just emotionless, empty void of darkness that just moves looking to strike. In the early stages, he has to be this kind of vicious predator, cold. 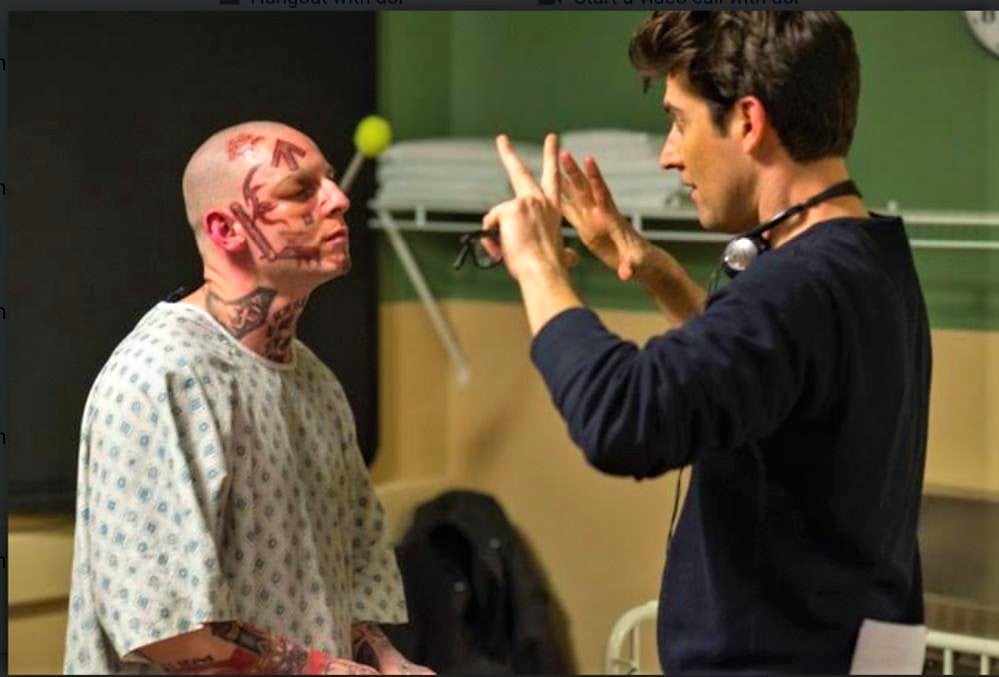 How long did it take to put on the tattoos? Three and a half hours for the face and arms, then five hours for the full body. We were on a small budget. So, we only printed so many, and to produce more would cost us more. So, some days my makeup artist, Stevie, would say, “Uh, you need to leave it on. We don’t have any money.”

So, I’d be walking around the hotel, and in Kingston, New York, wearing head tattoos (laughs).

Nobody messed with you, for sure. Nobody. The crew was like, “We’re not hanging out with you (laughs).”

Do you have tattoos of your own? I do have tattoos. My son’s birthday, things like that. Meaningful milestones in my life.

In this Trump era, are you worried about the future? Yeah, of course. Certainly, when you have children … [who] are American citizens—everything that is happening is affecting their lives going forward.