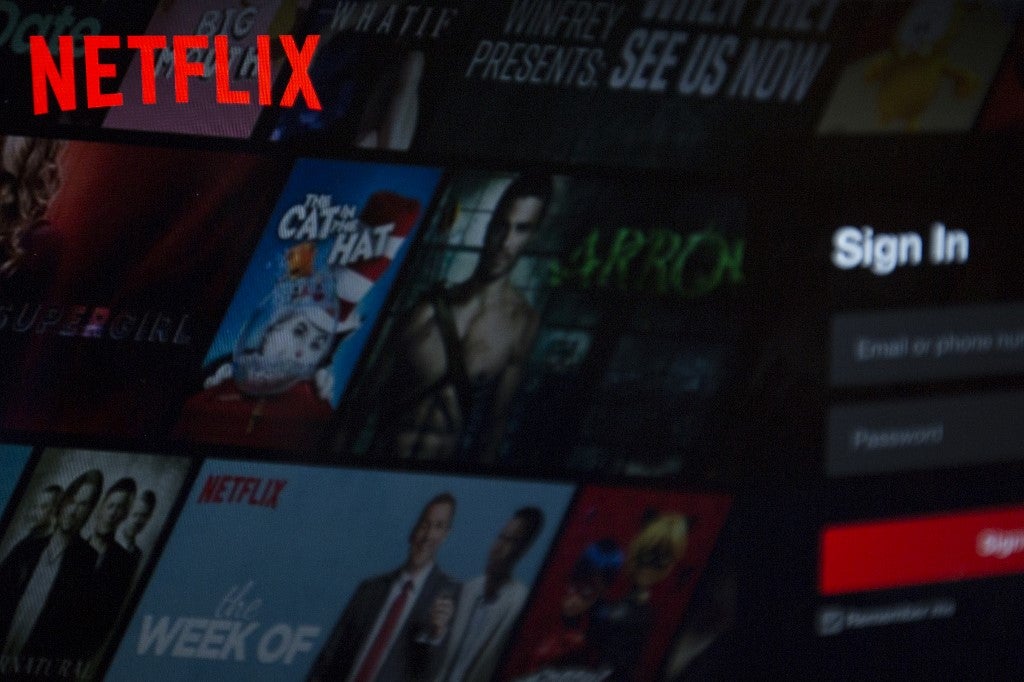 The Netflix logo is seen on a computer in this photo illustration in Washington, DC, on July 10, 2019. (Photo by Alastair Pike / AFP)

Netflix said it added 2.7 million new subscribers worldwide in the April-June period, well below expectations, as the sector prepared for offerings from rival groups including Walt Disney, Apple and others.

Shares in Netflix skidded 11.97 percent to $319.07 in after-market trade following the results, which showed revenues and profits largely in line with analyst forecasts.

Netflix said that it still sees long-term growth on target, dismissing concerns that consumers were gravitating to rivals.

“I think our position is excellent,” Netflix chief executive Reed Hastings said in an earnings presentation.

“If investors believe in internet television, then our position in that market is very strong.”

Hastings maintained that while there may be a streaming television war going on, the market is so vast that rival services can thrive. He quipped that many Netflix employees are fans of HBO shows.

Netflix, known for its original shows such as “The Crown” and “Orange is the New Black,” said the latest shows did not attract as many subscribers.

That, along with hikes in the price of subscriptions in some regions, appeared to dampen growth, Hastings and other top executives said.

Subscriber growth reignited in the opening weeks of the current quarter, with the release of the latest season of blockbuster original series “Stranger Things,” according to executives.

“Netflix has a difficult road ahead with looming competition and the removal of popular content, but a strong content schedule in Q3 should draw many former subscribers back in,” said eMarketer forecasting analyst Eric Haggstrom.

Netflix said revenue for the recently ended quarter grew 26 percent from a year ago to $4.9 billion and profit fell 29 percent to $271 million.

Netflix will be losing some of its hit shows such as “Friends” to rival platforms being launched in the coming months, but argued that it will make up for that with original content.

“Much of our domestic, and eventually global, Disney catalog, as well as ‘Friends,’ ‘The Office,’ and some other licensed content will wind down over the coming years, freeing up budget for more original content,” the company said.

“From what we’ve seen in the past when we drop strong catalog content… our members shift over to enjoying our other great content.”

WarnerMedia will launch its new Netflix rival “HBO Max” in early 2020 after reclaiming the rights to stream its popular television comedy “Friends,” the company said Tuesday.

The new service will enter an increasingly crowded TV streaming marketplace, vying for customers with Netflix, Hulu and Amazon as well as the soon-to-be-launched Disney+, and Apple’s upcoming product.

Netflix said that it has no plans to add advertising to its streaming television service.

“We, like HBO, are advertising free,” the Silicon Valley-based company said.

“That remains a deep part of our brand proposition; when you read speculation that we are moving into selling advertising, be confident that this is false.”

The company planned to continue to invest in original content to keep and win subscribers.

Netflix last month made its first formal appearance at the annual Electronic Entertainment Expo, showcasing plans for video games based on hit original shows such as “Stranger Things.”

A “Stranger Things 3” video game tailored for PlayStation, Switch, and Xbox consoles as well as personal computers was released on July 4 as a download priced at $19.99.

Netflix this year will also release a strategy game spinning off an original “The Dark Crystal: Age of Resistance” television series based on a dark puppet animated film from 1982.

A new “Stranger Things” role-playing puzzle game for mobile devices will be released next year.

“Like our other merchandising initiatives, these games are designed to build fandom for our titles and don’t signal a push into gaming as a new business for Netflix,” the company told shareholders.

Netflix also revealed plans to roll out a low-priced mobile-screen plan in India to lure people to its service there.

Read Next
Ogie Diaz warns public of stranger posing as his talent scout
EDITORS' PICK
EuroMillions Superdraw: A lottery draw unlike any other is coming to the Philippines
‘Justice will be done,’ Duterte assures as he vowed probe on Jolo incident to bare ‘truth’
Water remains our saving grace right now
Smart releases Hyun Bin’s second TVC
Current dominant strain of COVID-19 more infectious than original—study
DOLE: Return of OFWs’ remains from Saudi to be ‘delayed,’ deadline moved to ‘early next week’
MOST READ
Locsin warns of ‘severest response’ if China’s army drills in SCS ‘spill over’ to PH domain
Duterte tells military: No other president looked at you the way I did
BREAKING: Duterte signs anti-terror bill into law
Go apologizes for 5-on-5 game; PBA summons Japeth, ROS rookie
Don't miss out on the latest news and information.