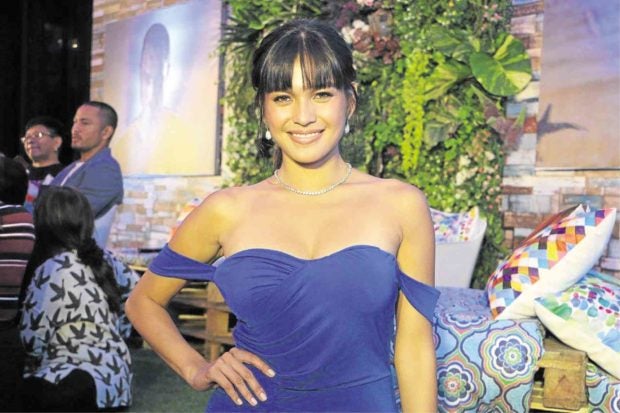 Though Andrea Torres is required to show some skin and do intimate scenes every so often for her new drama series, “The Better Woman,” she has never felt awkward or uneasy on set, she said, thanks to her professional coworkers onscreen and off.

“Our director (Mark Sicat dela Cruz) sits down and thoroughly discusses with me how we’re going to do the scenes. He sees to it that, as much as possible, there are only a few people around during the actual filming. Then, he allows me to check the footage,” Andrea told reporters at a recent press conference.

The director also is mindful of Andrea’s limitations. “He always asks me about that. But so far, I can’t think of anything [that has made me uncomfortable]. I’m always open to doing what’s asked of me, as long as it will make the show better,” she pointed out.

Her leading man, Derek Ramsay, is just as perceptive about her comfort level. “Very maalaga,” Andrea said. “It didn’t take long for us to establish a connection. I didn’t feel awkward with him. We jibed because we have similar values and humor.”

When she first got wind of the news about Derek’s breakup with his girlfriend, Andrea knew that she was going to be linked to the issue one way or another. “It can’t be helped because we work together … I expected it,” she said, adding that Derek never brought up his personal issues with her.

“I don’t know anything about it, so I’m not in a position to talk,” stressed the 29-year-old Kapuso talent, whose concern is to improve her working relationship with Derek.

“I’m happy when people say we have good chemistry together because we have work to do,” she pointed out. “I see that he has good qualities—respectful and loving toward his family. But I don’t think much of it beyond that.”

In “Better,” which airs weeknights on GMA 7, Andrea plays a dual role: Jasmine, a doting wife to Andrew (Derek); as well as her estranged twin sister, Elaine, who stands to ruin the couple’s marriage. Because Elaine is an exotic dancer, Andrea had to take up lessons in pole dancing.

“I have newfound respect for pole dancers because it really is difficult and painful. Having bruises was inevitable, and it was tricky trying to cover them up for my beach scenes,” she related.

But Andrea was able to put up a routine without falling—a small victory.

“It feels fulfilling. I don’t think I’m good at it but I’m proud to say that I did it myself; that I trained for it,” said Andrea, who watches what she eats and goes to the gym as much as possible to maintain her figure, which she shows off in bikinis.

Meanwhile, when it comes to acting, Andrea is thankful to have a veteran, multiawarded actress like Jaclyn Jose guiding her.

“She’s a Cannes best actress winner. Her feedback means a lot to me, so I feel flattered when she has good words about my performance. She’s experienced and knows a lot of ways to approach a scene. I value her suggestions. She’s also kalog and a lot of fun to work with,” Andrea related.