In Taylor Swift’s first public appearance since discovering her masters were in the hands of someone she’s not a fan of, the singer did not directly address the issue, but she did play music from that rich catalog, including songs from her groundbreaking sophomore album to her first full-blown pop project to her latest title. 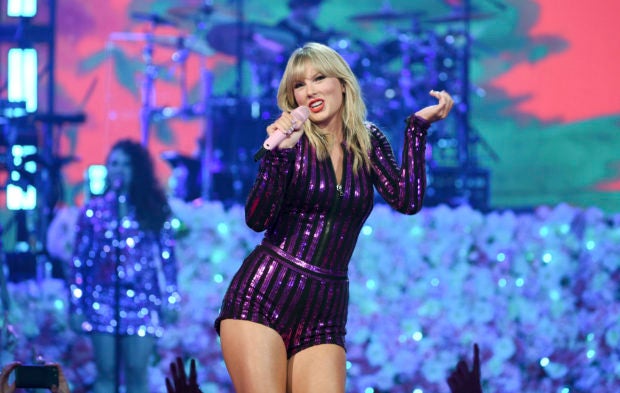 There was one moment, though, where Swift may have called out Scooter Braun and Scott Borchetta on Wednesday, July 10, when she headlined Amazon Music’s Prime Day Concert in New York City. When singing her final song, the upbeat hit “Shake It Off”, she was extra loud as she uttered the words: “Liars and the dirty, dirty cheats of the world.”

Some viewers on social media felt like Swift was throwing shade, but the pop star seemed to shake off the drama with a fun, entertaining performance that came two weeks after she wrote that she was sad and grossed out that her music catalog now belongs to Braun, who she accuses of subjecting her to years of incessant and manipulative bullying.

Swift’s die-hard fans were as loud as ever on Wednesday, erupting before she hit the stage at the Hammerstein Ballroom, chanting her name minutes before she opened her set with a colorful performance of the song “ME!”.

She sang tunes from all of her albums except her 2006 self-titled debut. She strummed her guitar while she sang “Delicate” from “reputation” and “Welcome to New York” from “1989”, which won the Grammy for album of the year. She reminded the audience she was a former country singer before performing “Love Story” from “Fearless”, which also won the top Grammy prize. And she whipped her head back and forth as she belted “I Knew You Were Trouble” from her “Red” album.

Swift sang her “You Need to Calm Down” live for the first time at the event, which also featured performances by singers SZA, Dua Lipa and Becky G. In the song Swift addresses her own haters but also calls out those who attack the LGBTQ community. It will appear on her new album, “Lover”, to be released Aug. 23.

“It’s really, sort of, a love letter to love itself. And I think that love is such an inspiring thing to write about,” she said of the upcoming album. “Love is complexity. Love is struggle. Love is pain. Love is joy. Love is hope. Love is equality.”

She said, he said: What’s next with Taylor Swift’s catalog?