Playlist: A look back at EXO’s history through 10 songs

In celebration of #ExoMonth, we look back on the group’s eight years of history through 10 most popular songs

Last month, S.M. Entertainment announced to the delight of fans across the world that July will be the month of EXO as the company announced a number of projects including solo and unit albums as well as concerts.

July, however, began with a bittersweet moment as bandmate Do Kyung-soo, who is better known as D.O., joined the military as the group got together to see him off. An Instagram post showing the bandmates minus Xiumin who is in the military was liked over 1.6 million times.

Having debuted in 2012, EXO has become one of the most successful boy bands in K-pop in recent years. From its debut to performing at the 2018 PyeongChang Olympics, here are 10 songs from each year that have shaped the group’s career.

The lead single from the group’s debut EP of the same title would go on to mark the very beginning of a successful 8 years.

EXO debuted in the form of two subunits — EXO-K and EXO-M — with each singing in Korean and Mandarin, respectively.

Written by Yoo Young-jin, a top songwriter at S.M. Entertainment, the orchestra-laden rock-pop track has rock references throughout including a sampling of “Fundamentum” by German band Lesiem.

History, as we look back on that of EXO, is a fitting choice as it came out as one of the two prologue singles before the release of their “Mama.”

Also written by Yoo Young-jin alongside Thomas Troelsen and Mikkel Remee Sigvardt, the videos for the electro-pop dance tune including the music videos for EXO-K and EXO-M’s versions as well as the dance practice videos all racked up over 100 million views in total.

The megahit single from the repackaged version of the first studio album “XOXO” also made it to the list. 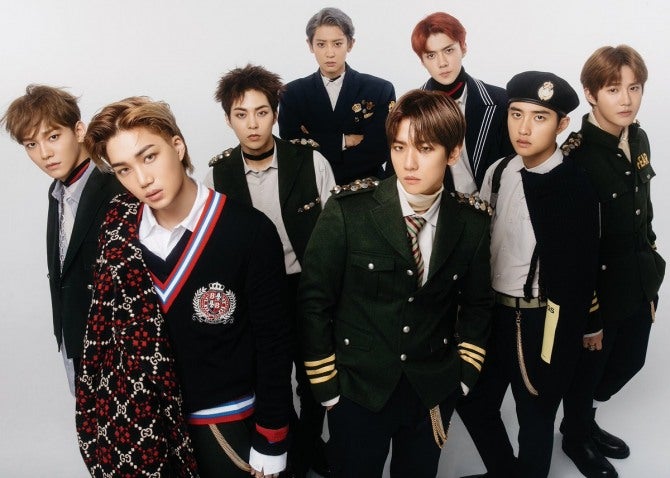 PHOTO from S.M. Entertainment via The Korea Herald/Asia News Network

The ballad track from the second EP of the same title was released in December 2013. Coming on the heels of the group’s successful previous single “Grow,” the Korean version of the track was sung by D.O., Baekhyun and Chen and the winter-themed accompanying music video has been viewed more than 47 million times.

The dance tune, which is packed with elements of hip-hop and R&B, was produced by the American production duo The Underdogs while Kenzie wrote the lyrics.

The EP “Overdose” is the last album to be released separately by EXO-M and EXO-K and it also entered the Billboard 200 chart in the US.

From the second studio album “Exodus,” the million-seller track “Call Me Baby” was released in Mar 2017. The song comes with fun lyrics and addictive hooks. The video for the track was one of the most watched K-pop music videos in 2015 and went on to rack up over 200 million views in 2018.

Released as one of the double title tracks along with “Monster,” the disco-inspired dance pop tune was also given the music video treatment. Set in a hospital, the sci-fi themed music video shows members donning white suits trying to escape from a ward as nurses try to experiment on the bandmates.

Lyricist Kenzie and hit-making duo LDN Noise teamed up for the track of their third studio album “Ex’Act.” The medium-tempo dance tune received both critical and commercial praise, topping Billboard’s US World Digital Songs chart and being named the second best K-pop track of the year by Dazed.

Produced by LDN Noise, the 2017 EDM single from the repackaged edition of the group’s fourth studio album “The War: The Power of Music” embodies powerful energy with the aid of addictive drum beats and synthesizers.

The song also made its debut during the 2018 PyeongChang Winter Olympics as one of the two songs the group performed during the closing ceremony.

The lead single from the group’s record-breaking fifth album “Don’t Mess Up My Tempo.” is a hip-hop dance track. Featuring powerful basslines and rhythmic beats, the song sees the group talk about the excitement of being in love and wanting to continue uninterrupted.

In terms of commercial success, the record marked the fifth consecutive album to sell over one million copies, making the group a “quintuple million-seller” and bringing the total domestic album sales to 10 million.