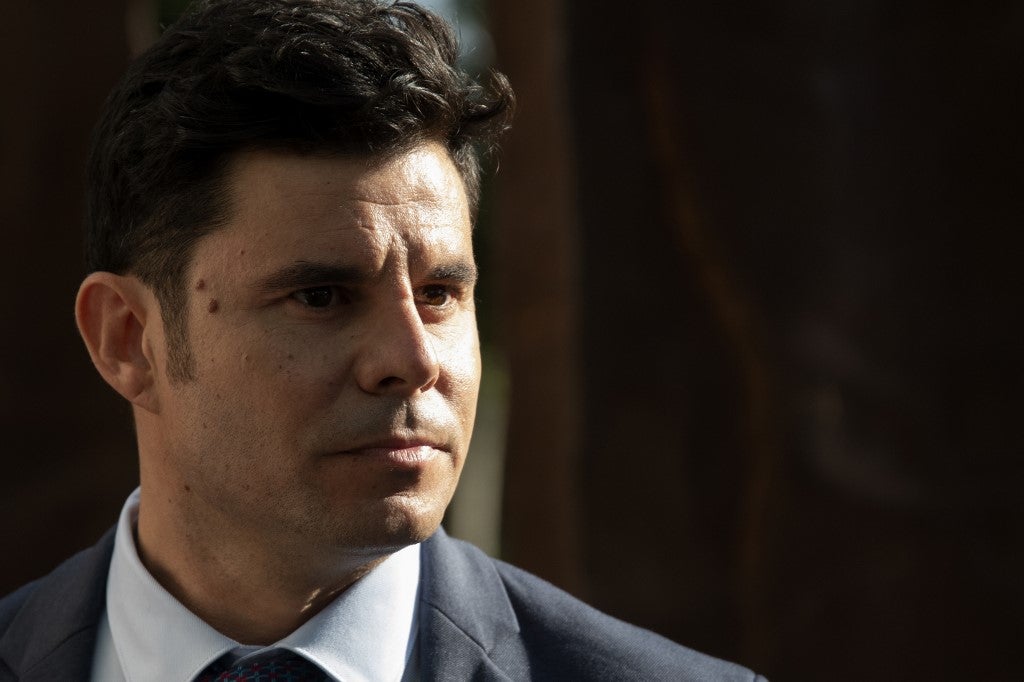 In this file photo taken on May 30, 2019 Javier Sanchez Santos, who claims to be the son of Spanish crooner Julio Iglesias, stands outside the court of Valencia before a hearing to examine his paternity claim. (Photo by Jose Jordan / STR / AFP)

MADRID, Spain (Updated) — A Spanish court ruled Wednesday that Grammy award-winning singer Julio Iglesiasis the biological father of a 43-year-old man after a protracted paternity battle with the star.

The judge in the case refused to admit DNA evidence obtained surreptitiously by a private detective working for the claimant and his lawyer.

But he ruled that the man’s mother had provided credible details of her affair with the singer and also cited the physical resemblance between the two men.

Iglesias himself has always refused to give DNA evidence to settle the dispute.

The case was brought by Javier Sanchez Santos, the son of Portuguese former ballerina Maria Edite, who says she had a brief affair with Iglesias in 1975.

After examining the paternity suit, a judge at a court in the eastern city of Valencia “declares that Julio Iglesias is his biological father,” the court said in a statement.

Edite told the court that she had a one-week affair with Iglesias in Catalonia in Spain’s northeast in July 1975 and that nine months later Javier was born, said Sanchez’s lawyer, Fernando Osuna.

The singer’s defence team had argued that the trial should not take place since the case had already gone to court before and was dismissed. The 75-year-old singer did not attend the trial.

But Osuna had argued a new trial was justified as they had “DNA evidence” brought from the United States by a detective.

The detective managed to get close to the singer’s son Julio Iglesias Junior while he was surfing in Miami and picked up a bottle of water that was used in a DNA test, the lawyer said.

That test showed that Julio Iglesias Jr and Sanchez were brothers, Osuna added.

The judge refused to admit the DNA evidence obtained by the detective.

But he ruled that Edna had provided “very concrete” information about the location and description of the chalet where Iglesias was staying when she says she had an affair with the singer.

He also cited as proof of the singer’s paternity the “obvious physical resemblance” between Iglesias and Sanchez — and the singer’s steadfast refusal to carry out a DNA test despite evidence of the affair.

Iglesias has 20 working days to appeal the court ruling.

Lawyer Fernando Osuna meanwhile quipped on Twitter that Iglesias had “become a father at the age of 75.

Iglesias is known for his romantic ballads and a prolific love life that has long been fodder for tabloid headlines. He has sold over 300 million albums in his decades-long career.

He has been married twice, to Spanish socialite Isabel Preysler with whom he had three children, and to Miranda Rijnsburger, his current wife with whom he has five others.

He has often presented himself as an unapologetic flirt with “an obsession for sex.”