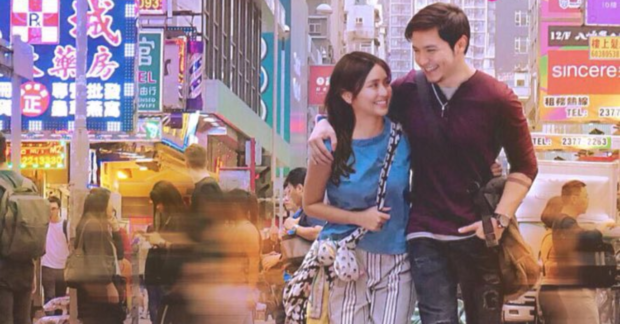 Kathryn Bernardo and Alden Richards will star in their first team-up film “Hello, Love, Goodbye”—but some diehard fans of their love teams are not pleased about it.  Image: Twitter/Star Cinema

As actors like Kathryn Bernardo and Alden Richards explore projects outside of their love teams, it seems some diehard fans feel disappointed about kissing scenes with other partners.

Some have even gone as far as blaming Bernardo’s mom, Min Bernardo, for her daughter’s choice to do a new project without boyfriend Daniel Padilla.

The actress stars in “Hello, Love, Goodbye” with Kapuso star Richards. Both are one-half of major love teams, with Richards having been paired with Maine Mendoza as Yaya Dub in “Eat Bulaga.”

A Twitter user Chabelita (@chabeli53330198) claimed on Sunday, July 7, that fans of Aldub Nation and KathNiel fans will boycott the movie because Kathryn and Alden supposedly have kissing scenes. The netizen blamed Mommy Min for not respecting Padilla as her daughter’s boyfriend.

Mommy Min gave the Twitter user some choice words. She replied, “Part ka ba ng creative? Malamang HINDE…ang ikinakalat mong kwento ay taliwas sa story (Are you part of the creative [team]? Obviously not… what you are saying is contrary to the story)…”

She also defended her parenting, saying that there is a lot the netizen does not know. “Sana kung maging magulang ka na, maging isa kang huwaran…then, tsaka mo ako balikan at kausapin (I hope that when you become a parent, you will be a role model… only then should you get back to talk to me).”

Mommy Min previously spoke up for her daughter against hateful comments or rumors, such as speculations in February that KathNiel had split after they unfollowed each other on Instagram. At the time, in a comment on Instagram, she urged fans that if they loved Bernardo and Padilla, then they would believe in them.  /ra

Kathryn Bernardo to Daniel Padilla on 7th anniversary: ‘What we have is real’