MANILA, Philippines — “Baby steps are better than no movement at all,” said independent filmmaker Paolo Villaluna, who is also president of the Directors’ Guild of the Philippines Inc. (DGPI).

There is still much work to be done to promote the interests of the members of the local entertainment industry, Villaluna told the Inquirer. But he acknowledged one baby step: Memorandum Circular No. 2019-01, or the “Policies and Guidelines on the Theatrical Release of Films in Philippine Cinemas.”

The memorandum, to be implemented starting in the second week of July, switches the opening day of both local and foreign films from Wednesday to Friday in order to draw more moviegoers during the weekend.

Currently, movies with low audience turnout often get pulled out of theaters before the weekend, or just when more people are available to watch.

Liza Diño, chair of the Film Development Council of the Philippines (FDCP), described the memorandum as “the culmination of the FDCP’s efforts to strengthen industry practices and level the playing field for all our stakeholders—from film producers to distributors to exhibitors, and even audiences—through a transparent and fair set of guidelines [governing] the screening of films in commercial theaters.”

The memorandum pegs a minimum run of seven days for every movie booked for release, as well as a cinema assignment guarantee for the first three days (Friday to Sunday) to prevent movie pullout, except in “extreme cases,” such as “zero to less than the expected turnout of audience during screening.”

It assigns “full screens” for a movie’s first three days of exhibition, as opposed to “screen splitting” (or “sliding”) wherein two movies share one cinema and have alternating screening schedules within the day.

The memorandum states that films already shown in cinemas may be screened in other platforms, such as streaming apps or pay-per-view channels, only after a holdback period of 150 days starting from the first day of exhibition, “in order to maximize the movies’ revenue opportunity in local cinemas.”

It requires “a fair ratio” between local and foreign movies, except when film festivals like  Pista ng Pelikulang Pilipino (in September) and the Metro Manila Film Festival (in December) are having their nationwide run.

To encourage the youth to watch local movies, the memorandum pegs ticket prices for students (18 years and below) at P200 in Metro Manila and P150 in the provinces every Wednesday. 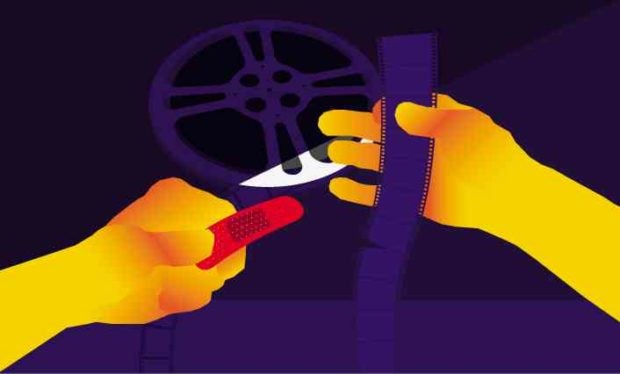 Asked if he considered this good news, Memphis Xavier Cuison, 17, said: “Yes, because watching movies at a lower price will give me more money for food and beverage. I also think this will encourage youngsters to watch movies at the cinema more often.”

Anela Randee Abeleda, 18, thought otherwise: “[But] you can watch movies online for free. You don’t need to go to the cinemas. Besides, not all young adults, especially the students, have time to go to the malls just to watch movies.”

Dundee Espina, 17, who said he enjoyed going to the cinemas with friends and family, noted that “students would be missing a lot if they don’t avail [themselves] of this discount.”

Said Lia San Pedro, 15: “The usual reason students don’t watch at the cinemas is the high ticket price. I believe providing a discount will definitely change the situation for us.”

Rohan Soriaga, 14, said it had been a while since he went to the cinemas. “Lowering the ticket price will definitely encourage young people like me to watch movies as a form of relaxation,” he said.

Diño reported that consultations with producers, cinema operators and film distributors were held on March 14, and with stakeholders on April 25 at the Cinematheque Center in Manila.

She said she was pleased that both film producers/distributors and cinema operators “started to open up and were willing to listen to each other” during the consultations in March.

“They used to just resort to ranting on social media, and so these concerns had never been properly addressed,” she told the Inquirer. “The issues raised were all answered properly on that day. The answers may not be what each party wanted, but at least they understood where the other was coming from.”

Said the DGPI’s Villaluna: “People like us who care for the industry still have to be vigilant. Even though [the issuance of] the memo is a good thing, we also have to make sure that this will not be abused.”

Villaluna also observed that “making the industry professional will result in casualties here and there.”

Diño agreed, saying: “We’ve resolved a lot of problems, but consequences will be likely.”

She added: “The bottom line here is that, as we celebrate the 100th anniversary of Philippine cinema, we ask ourselves these questions: Do we really want this industry to grow? How much support are we willing to extend to achieve this goal?”

Diño said the Department of the Interior and Local Government (DILG), Movie and Television Review and Classification Board (MTRCB), Department of Trade and Industry-Export Marketing Bureau (DTI-EMB), and Office of the Presidential Legal Counsel and Spokesperson supported Memorandum Circular No. 2019-01.

“It’s good that other government agencies were there to show support,” she said. “It tells the people that it’s not just the FDCP that’s working toward finding a solution to industry problems, that we’re all working together to achieve this.”

Salvador Panelo, the presidential spokesperson and chief legal counsel, represented the support extended by the Office of the President to this cause, explained Ria Anne Rubia, the FDCP chair’s chief of staff.

The DILG serves as the industry’s link to local government units that distribute the money collected from amusement taxes paid by moviegoers to cinema operators in cities and municipalities.

The MTRCB, which is empowered to revoke registration and exhibition permits, may be tapped to monitor cinema operators’ compliance with the new guidelines.

“The DTI is part of our board of trustees,” Rubia said. “It also helped draft the guidelines in line with business and industry practices.”