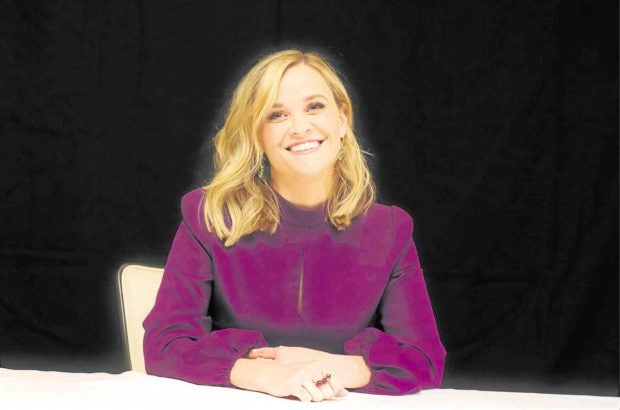 LOS ANGELES—It was fascinating to hear Reese Witherspoon recount how she psyched herself up before she shot her first scene with the world’s preeminent actress in “Big Little Lies.”

“Meryl is the person who surprises you the most,” Reese said about La Streep, who joined the cast of HBO’s acclaimed limited series in its Season 2. This time, the crime-drama-mystery explores the emotional trauma the so-called “Monterey Five”–Reese, Nicole Kidman, Shailene Woodley, Zoe Kravitz and Laura Dern–continue to face after the death of Perry Wright (Alexander Skarsgard).

Meryl’s Mary Louise Wright arrives in town to find out the truth about her son Perry’s death. Needless to say, Mary Louise has an adversarial relationship with the Monterey moms, including Reese’s Madeline Martha Mackenzie.

“When I walked on set that first day and Meryl was wearing her full costume and she had her look completely thought out, it was not at all what I thought it was going to be,” shared Reese, radiant in purple Rochas dress in this Los Angeles interview. “Meryl created this character who is so … pathetic. And sad … sort of martyr that you couldn’t be angry at her.”

Reese, an excellent actress herself, offered an engrossing peek into what it’s like to act opposite the most nominated performer in both the Academy and Golden Globe Awards’ history.

Reese added, “I have learned so much from Meryl. It begins with the idea that just reading the script doesn’t inform character. I mean, she knows where her character was born. She knows how much money she has. She knows how many times she’s been married and divorced. She knows her religion, if she’s sort of religious or not. 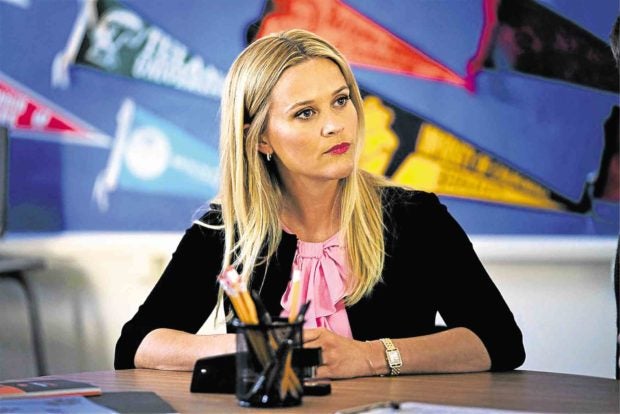 “I remember on the first day, my character wanted to challenge her. So, my character decided to improv with her.  And it was amazing! Because we had to do this whole improv about where Mary Louise wanted to find her apartment. Meryl had memorized all the surrounding areas of Monterey, so she knew exactly where her character would have rented an apartment!”

But there’s more, according to Reese: “She had studied Alexander Skarsgard for his facial techniques, what his mouth did and how his face moved. She tried to emulate a lot of these things.

“If I wasn’t a fan before, now I’m like an uber fan. But it was humbling, and it made you work harder. It made you come to set and be even more prepared. And I’ve been working with Laura, Nicole, Shailene and Zoe.”

Away from the cameras, Reese and her castmates had more reasons to be enamored with the legendary actress, who just turned 70 last June 22.

“Off the set, Meryl puts it all aside and she’s like, ‘Where shall we go to dinner, girls?’ I’d be, like, ‘Does anyone want to get dinner?’ She was always the first person to say, ‘Yes! Are we having wine? Let’s do it!’

Oh, to be a fly on the wall listening to Meryl: “And she would tell us stories about everything, from ‘Kramer vs Kramer’ to ‘Sophie’s Choice.’ It makes me want to cry (laughs). I’ve got all these amazing stories about her experiences, then Nicole would tell stories about Stanley Kubrick or Baz Luhrmann.

“You just think about the history of these women in this room is extraordinary. I feel very honored to be mentored by these women whom I’ve looked up to for so long.”

As for her own character, Madeline, Reese said: “It’s fascinating to examine all of these issues, whether you’re dealing with motherhood, relationships, friendship, sexual assault or domestic violence, but from a female perspective. When we were creating Madeline in Season 1, the affair and all that wasn’t in the book.

“The second season is about recovery from trauma, learning to look at yourself through a real clear lens, trying to understand that things are progressing and moving forward.”

Reese, who produces the show with Nicole, creator David E. Kelley and others, talked about her production company with obvious pride.

She said, “My company is called Hello Sunshine. Our mission is to put women at the center of their stories and have more diverse voices telling stories in Hollywood, and all over every media platform, whether that’s  Instagram or YouTube.

“Another thing that we’re doing is we have an initiative where we have 20 girls every summer from very diverse backgrounds come. For eight days, they learn everything about Hollywood, how to edit, write for the screen, to actually shoot film, to market things. I never thought I’d have the opportunity to mentor this many young women. But this is our second year, and we do it every July.”

The mom of three in real life happily obliged with an update on her kids: Ava Elizabeth and Deacon Reese, both with ex-husband, actor Ryan Phillippe, and Tennessee James, with husband James Toth, a top Hollywood agent.

“The kids are great,” she began, beaming. “My daughter is in college now. And my son is in high school. Neither one of them shows signs of wanting to be in the movie business. But my son is  interested in music … He’s 15 and my daughter is 19. He’s been driving (laughs), which is sort of terrifying.

“Lots of dating. My house is filled with teenagers all the time, which is so much fun. It’s nice being the mom of a teenager. We have great conversations. We get to travel and talk about issues. Then, I have a 6-year-old. And he’s about to go to first grade.”

Asked about the ending of the series which has attracted many viewers, Reese answered, “Oh! It’s so good.”

Pressed on why the finale is going to be controversial, Reese revealed, “It wasn’t one finale script. We shot a bunch of different endings, then we made a choice later.

“We only made a decision about five weeks ago. All the seven producers watched it at once … And, oh, we had some arguments. We had questions.

“So, I can’t wait for people to see it because I think it will be a conversation starter, for sure. It definitely ends with a bang. I think people will be talking.”

“I am thrilled,” she said when asked if she herself is happy with the ending. “Mainly because it lets the audience have their own opinions of whether or not …  these women are making the right choice for their lives.”