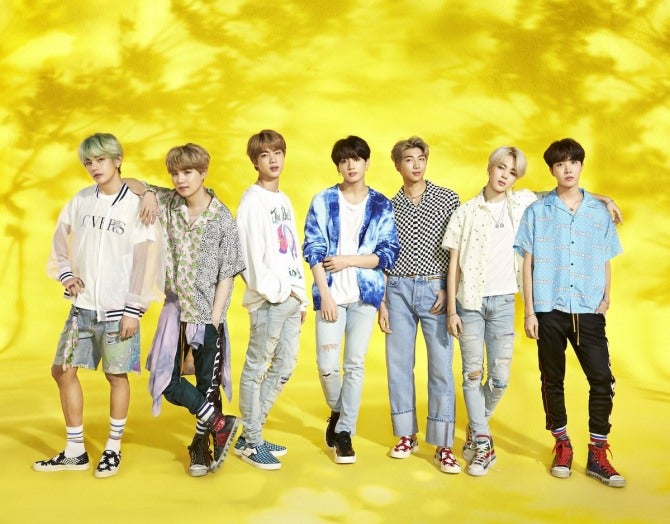 SEOUL — After the sold-out European leg of its world tour, BTS is heading to Japan with the new original Japanese single “Lights,” which was released Wednesday.

The double A-sided single features the electro-pop tune “Lights,” nearly two years since the band’s last original Japanese song, “Crystal Snow,” as well as the Japanese version of “Boy With Luv,” the lead single off the group’s chart-topping album “Map of the Soul: Persona.”

“Lights” was given the music video treatment for the first time in nearly four years for a Japanese single, and the single’s release precedes the Japanese tour dates on the next two weekends in Osaka and Shizuoka, respectively — the last leg of the group’s extended stadium tour “Love Yourself: Speak Yourself.”

Despite having been propelled to international stardom with music largely recorded in Korean, the group has put out new music in Japanese. Experts say this has to do with the nature of the Japanese music industry, which favors music in listeners’ mother tongue.

“Even though Korean songs might work within the group’s fandom in Japan, for the general public, it would be more effective to record in Japanese.”

On Tuesday, the single was announced to have topped Japan’s Oricon daily singles chart, selling at a much faster pace than their previous single “Fake Love/Airplane pt.2 with,” with preorders having reached one million, according to Universal Music Japan.

Veteran music critic Im Jin-mo added: “If you look at Korean artists who enjoyed success in Japan, such as BoA, they all sang in Japanese. Rather than prioritizing the Japanese market, I think artists are just accepting the nature of the industry and going with it.”

In the meantime, critics downplayed the impact of the latest political rift between Seoul and Tokyo on BTS’ promotional activities in Japan this month.

Relations between the two countries fell to a new low Monday after Japan announced plans to toughen restrictions on several key chemical exports to South Korea — retaliation for a 2018 Korean Supreme Court ruling that two Japanese firms must compensate Korean victims of forced labor during Japan’s colonial rule of the Korean Peninsula.

“The sold-out concerts have already proved their ticket power among Japanese fans. Considering their huge and strong global fandom based on social media, traditional voices like conservative media and right-wing groups will have a limited impact on their Japanese activities,” Jung said.

In a further sign of BTS’ popularity, the seven bandmates graced the covers of some of the country’s most-read fashion magazines like “Cancam” and “Anan.” The band also plans to hold a fan meeting in Tokyo on July 16 and 17.