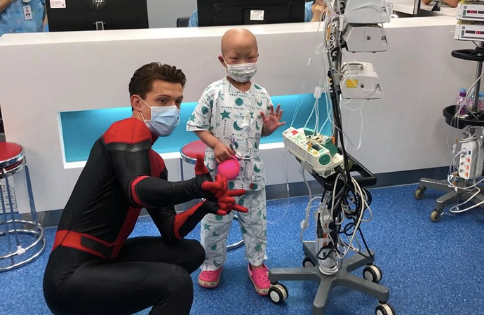 Hollywood actor Tom Holland, or “Spider-Man” to fans, brought happiness to the young patients of Seoul National University Children’s Hospital by surprising them with a visit.

The United States Embassy and Consulate in Seoul shared a scene from Holland’s surprise visit via their official Facebook page on July 2. In the photo, Holland can be seen posing with a young boy while people looked on.

“A real superhero made these kids super happy!” said US Embassy Seoul. “Hollywood actor Tom Holland made a special visit to Seoul National University Children’s Hospital to bring cheer to children staying there during his visit to Seoul to promote his new movie ‘Spiderman: Far from Home.'”

Holland began his promotional tour for “Spider-Man: Far from Home” in Seoul on June 29, as per Korea Times on July 2.

During his visit, he indulged the kids, parents and hospital employees by taking photos with them and stayed in character by donning his tight Spidey outfit and pretending to shoot webs from his wrists.

“It was Holland’s personal interest to come to the hospital,” Park Jung-won of the children’s hospital’s paediatric treatment administration was quoted as saying. “[Holland] wanted to follow Spider-Man’s heroic characteristics in visiting the children.”

Holland was in the children’s hospital for almost an hour and wore a face mask and feet covers as he toured all of its eight wards.  Cody Cepeda /ra