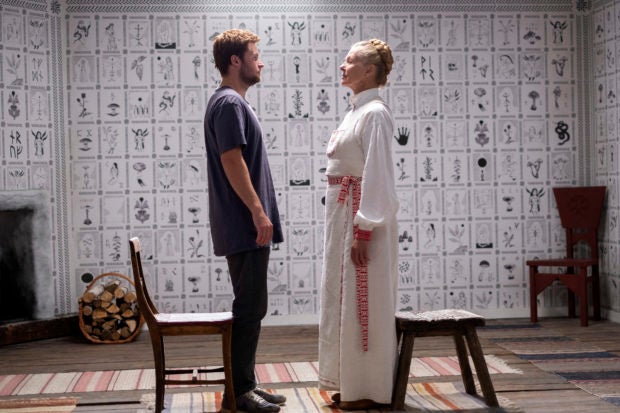 This image released by A24 shows Jack Reynor, left, and Gunnel Fred in a scene from the horror film “Midsommar”. Image: A24/Gabor Kotschy via AP.

“Midsommar” is a waking nightmare and I mean that in the best possible way.

For over two hours you will be transported to a beautiful village in the middle of nowhere in a foreign land where the sun never seems to set and everyone is wearing ornate flower crowns and enchantingly embroidered frocks. The details of why you’re there will seem fuzzy and dubious. Someone’s thesis, maybe? But you go along with it even when things start getting weird.

You will eat strange food and drink strange drinks. You will take drugs you don’t want and be subjected to ceremonies and rituals and a language you don’t understand. You will witness some of the most disturbing things you’ve ever seen. You will not be too concerned when people start disappearing. You will lose the ability to rely on your one anchor to the real world. And even though you will barely comprehend what’s going on around you, you won’t be able to leave or look away.

Writer and director Ari Aster is to thank, or blame, for this extraordinary experience that’s equal parts befuddling and enthralling. It’s only Aster’s second feature film following the terrifying family drama “Hereditary” and it’s clear that the talent and deranged verve he teased there was no fluke.

But enter with caution: “Midsommar” is not as straightforward a horror as “Hereditary” was. It’s hazier and harder to grasp, despite taking place almost entirely in blunt daylight. This is an experiment in escalating uneasiness absent any release or catharsis.

As in “Hereditary”, a family tragedy sets an ominous tone, but this time it hits you right at the beginning before you’ve gotten to know anyone. We meet Dani (Florence Pugh) while she is frantically trying to contact her family to make sure her sister is OK, but no one is responding. It’s the worst possible outcome.

Unfortunately for her the only person she has for comfort is a boyfriend, Christian (Jack Reynor), who has already broken up with her in his mind but hasn’t gotten around to communicating that to her just yet. Too bad for Christian and his unsympathetic friends (Will Poulter, William Jackson Harper, Vilhelm Blomgren), Dani’s family crisis makes the otherwise imminent split all but impossible. So, Dani, a haunted shell of a human, becomes a permanent fixture at Christian’s side, even going so far as to accompany the four guys on their bro trip to the Swedish commune where one of them was raised for a midsummer festival that happens every 90 years.

Aster literally turns the camera upside down as the five travel to this blindingly bright area. It helps you arrive a little queasy and disoriented (although not quite as much as the characters, who’ve just ingested some psychedelic mushrooms).

Still, the drug-induced visions are nothing compared to what they will experience as clear-minded tourists in this village, which at first seems like a quirky novelty. But as with so many chic cults, there is unfathomably grotesque violence and brutality lurking underneath the Instagram-worthy aesthetics. Aster lures you in with relative normalcy, including often very funny dialogue and situational absurdity as the Americans try to fit in in this world. But before you know it, it’s too late to turn back and you’re stuck patiently watching this floral paradise curdle into a pagan inferno.

“Midsommar” is audacious filmmaking and totally transfixing despite its lengthy runtime. It’s heartening to know that big, original cinematic swings like this have not gone extinct.

And yet, as with Jordan Peele’s highly anticipated sophomore feature “Us”, ”Midsommar” might not actually add up to anything especially satisfying, or completely coherent, in the end. Aster also curiously reuses some of the striking images he used so effectively in “Hereditary”, such as pagan iconography and starkly naked and desexualized bodies. And somehow these characters never evoke empathy on par with the “Hereditary” ensemble.

But the journey is fascinating enough that it’s still worth the trip. And by that point you’ll probably just be grateful that you’re finally allowed to wake up.

“Midsommar”, an A24 release, is rated R by the Motion Picture Association of America for disturbing ritualistic violence and grisly images, strong sexual content, graphic nudity, drug use and language. Running time 140 minutes. Three stars out of four. CC

Review: In ‘Us’, Jordan Peele holds a dark mirror to America

From ‘Get Out’, ‘Us’ to ‘Twilight Zone’ reboot: Jordan Peele is horror-thriller’s new master auteur