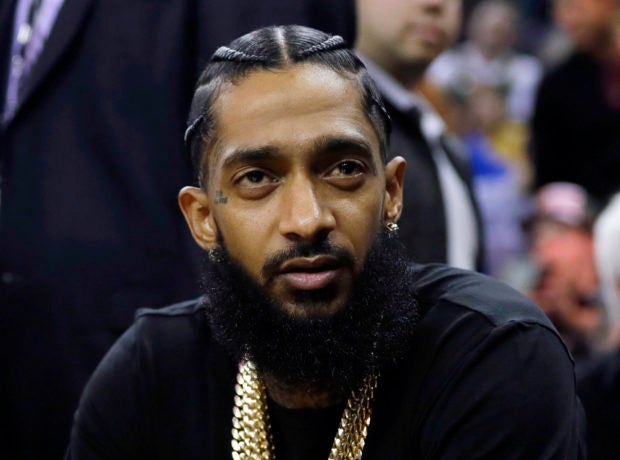 This March 29, 2018 file photo shows rapper Nipsey Hussle at an NBA basketball game between the Golden State Warriors and the Milwaukee Bucks in Oakland, Calif. Court documents show that Hussle and the man charged with killing him had a conversation about “snitching” shortly before Hussle was shot. Image: AP/Marcio Jose Sanchez

Court transcripts unsealed Thursday show that Nipsey Hussle and the man charged with killing him talked about “snitching” shortly before the rapper was shot, a conversation prosecutors said was the motive for the shooting.

In the grand jury transcripts, which provide the first glimpse of prosecutors’ case against Eric R. Holder, Hussle’s friend Herman Douglas testified about a conversation he overheard between the rapper and Holder. Douglas said he heard Hussle tell Holder there were rumors he had been talking to authorities about the Rollin’ 60s gang, and that police documents or court records showed it.

“You need to address it,” Douglas remembers Hussle saying in a conversation outside The Marathon, the rapper’s South Los Angeles clothing store where he was shot minutes later. “You know, basically telling the guy you need to be careful, you know, because people got some paperwork on you.”

Douglas testified that he, Hussle and Holder had all been affiliated with the gang at some point, though he and Hussle had not been involved in any recent gang activity.

“Obviously, that conversation about snitching was enough that it moved Eric Holder to a point of wanting to return to the parking lot and kill Nipsey Hussle,” McKinney said in his closing argument to the grand jury.

Authorities allege that Holder shot and killed Hussle and wounded two other men March 31. Holder has pleaded not guilty to murder and attempted murder charges.

Holder was arrested two days after the shooting. Los Angeles police Chief Michel Moore said that day that the dispute between Holder and Hussle was personal and did not involve gang activity. Asked about those comments Thursday, police said they had no additional information and were unlikely to release more because of the court case.

Holder returned to the scene about six minutes after his conversation with Hussle and used two guns to shoot Hussle at least 10 times, according to homicide investigators and a medical examiner who testified at the grand jury hearing.

“As he approached, he was prepared to fire as many shots as necessary and shoot as many people as necessary to ensure that he killed Nipsey Hussle,” McKinnney told the grand jury.

Kerry Lathan, one of the men wounded in the shooting, testified that he heard the shooter say “you’re through” right before he fired, appearing to point the gun at Hussle.

The woman who drove Holder to and from the scene also testified she heard the men talk about “snitching,” though she thought it was Holder warning Hussle on the topic.

The woman, a friend of Holder whose name and employers were not included in the transcripts, is a home health care worker by day who drives either for a ride-hailing or taxi service by night. She met Holder about a month earlier when she picked him up as a fare.

The woman testified that she had been excited to see Hussle when they first arrived at the shopping plaza and took a photo with him, having no idea of Holder’s intentions beyond getting food.

“I was like, ‘ooh, there goes Nipsey Hussle, he look fine. I want to take a picture.'”

She said she waited while Holder talked to Hussle before taking a picture with the rapper, who was very friendly.

Holder then bought chili-cheese fries from a burger place in the plaza before the two pulled out and into a gas station as Holder began loading a gun. He got out of the car and told her to wait, she said.

She testified that she then heard two gunshots and Holder returned to the car soon after.

The woman said she drove away without knowing who had been shot or that Holder had been the shooter.

She testified that upon learning that Hussle had died, “My heart had dropped.”

Holder called her that night and asked her to pick him up, which she did. She brought him to her mother’s house to spend the night, but testified that she didn’t bring up Hussle’s killing because “I didn’t want him to try to threaten me again or say anything to me about it.”

She said the following day, Holder told her he didn’t want to go home because it was “dirty” and she helped him get a room at a Motel 6.

The woman, who received immunity for her testimony, later turned herself in and had a five-hour interview with detectives. She said she called Holder while the detectives were listening, but the transcripts do not reveal what was said.

The grand jury listened to three days of testimony before it returned an indictment charging Holder on May 9 with the murder, attempted murder, and other felonies.

The documents were ordered unsealed by Superior Court Judge Robert J. Perry after a hearing Thursday where Kelli Sager, an attorney for the Los Angeles Times, argued that there was no legal rationale for keeping them secret.

The defense moved to keep them under seal, arguing that their publication could keep Holder from getting a fair trial. Deputy Public Defender Lowynn Young declined comment on the decision.

Hussle, 33, whose real name is Ermias Asghedom, was an underground phenomenon through his mix tapes for a decade before his major break last year that brought him a Grammy nomination. CC