A young man with erectile dysfunction, a pianist who pretends to be blind and a sperm donor raking in the cash: unconventional roles have catapulted Ayushmann Khurrana into Bollywood’s A-league.

Now the 34-year-old, one of the most popular actors in Hindi cinema at the moment, is set to tackle two of India’s weightiest subjects — caste discrimination and sexual violence. 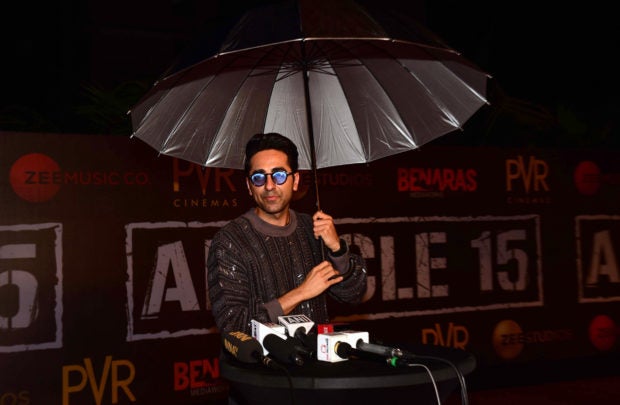 Khurrana plays an upper-caste police officer assigned to investigate the rape and hanging of a low-caste woman in “Article 15”, which hits screens across India on Friday, June 28.

Such cases are depressingly common in the pages of India’s newspapers, but it is rare for Bollywood — renowned for its cheery song and dance routines — to give them top billing.

“This practice has been going on for decades. With a film like ‘Article 15’, the discussion about caste discrimination comes into the mainstream,” Khurrana told Agence France-Presse (AFP).

The film’s title refers to the section of India’s constitution which outlaws discrimination on the grounds of religion, race, caste, sex and place of birth.

The movie — directed by Anubhav Sinha — drew inspiration from several true stories, including a 2014 gang-rape and the 2016 flogging of a low-caste Dalit family.

It is a departure from Khurrana’s usual roles in family comedies, and Sinha was initially skeptical about casting the actor as police officer Ayan Ranjan.

“Ayushmann is aware of his branding as a family audience, which is why at first even I could not see him in this part. But I was stoked by his keenness and conviction for this subject matter,” Sinha told AFP.

Khurrana began his career in theatre, moving onto radio and reality TV before debuting in Bollywood in 2012 in the romantic comedy “Vicky Donor” where he played the sperm donor.

He gained widespread acclaim for “Shubh Mangal Saavdhan” (Beware of Marriage) in 2017 before notching two of the biggest hits of 2018, a year when several industry superstars flopped at the box office.

In crime thriller “Andhadhun” (The Blind Melody) he played a pianist who is the only witness to a murder; in “Badhaai Ho” (Congratulations), a shocked 25-year-old trying to deal with the news that his middle-aged parents are expecting their third child.

“After the success of the last few years I feel able to make courageous choices and choose radical cinema,” Khurrana said in a phone interview.

“The films I am doing are about content, credibility and respect,” he added.

Khurrana’s stock is on the rise outside of India too. “Andhadhun” recently grossed $43 million in China to become the third-highest grossing Indian film there ever.

He believes streaming platforms such as Netflix and Amazon Prime are increasing the reach of Indian films that break the usual Bollywood mold, and in turn spread his popularity, amongst India’s vast diaspora.

Khurrana returns to type for his next two offerings: “Bala”, where he will play a man trying to cope with premature balding, and “Dream Girl”, both due this year.

He will then shoot alongside Bollywood megastar Amitabh Bachchan, before playing a homosexual man from a socially conservative family in “Shubh Mangal Zyada Saavdhan”.

Khurrana hopes the latter movie will help change attitudes in India, where gay sex was illegal until September last year.

“[A]… cruel bias against homosexuality still exists,” he said.

“A subject like this needs a mainstream actor and certain tonality to reach a larger population and start a conversation,” the actor added. RGA/JB

Bollywood biopic on Modi runs into trouble days before vote

Read Next
After ‘Avengers: Endgame’, can Spider-Man untangle Marvel’s future?
EDITORS' PICK
SM continues to send relief assistance to remote towns in Batangas
Batangas execs, Taal evacuees thank House; hopeful on rehab efforts
‘A greener, cleaner tomorrow’: A how-to guide for Filipinos who want to help with today’s energy crisis
5 years after Mamasapano, son of fallen SAF 44 trooper remembers his ‘idol’
Get exciting deals and discounts when you download the new McDonald’s App
PAL: Passengers with flights to parts of China may request for refund, rebooking
MOST READ
Dina Bonnevie on Coney Reyes: We have forgiven each other
No time for revelry; Tagaytay instead plans for alert level 5
Megan Young, Mikael Daez get married
Taal’s sulfur dioxide emission increases
Don't miss out on the latest news and information.