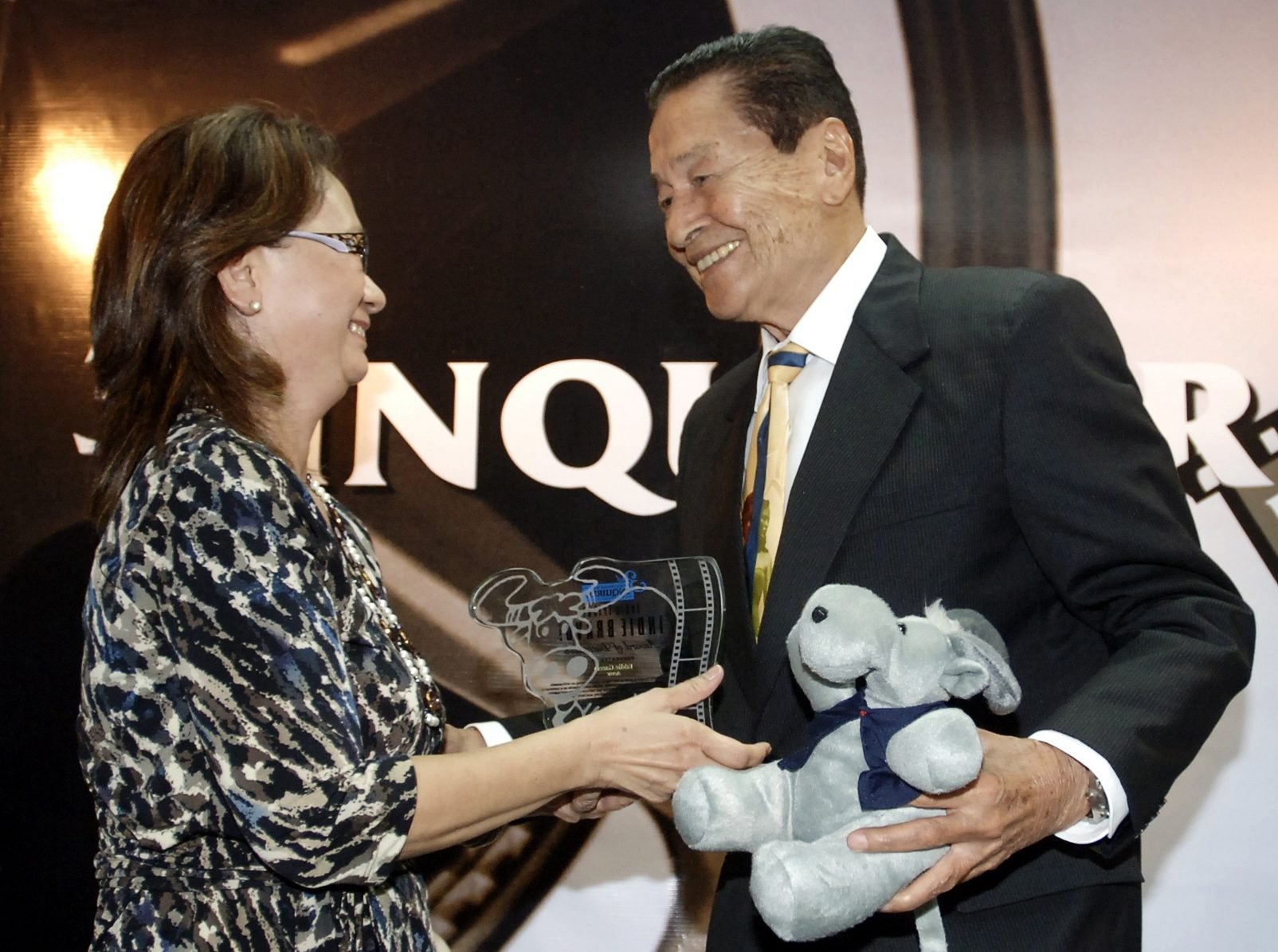 PH FILM ICON Eddie Garcia leaves behind a 70-year legacy of versatility and professionalism in front and behind the camera. In December 2012, he was one of the honorees in the Inquirer Indie Bravo awards (above), receiving a citation from then Inquirer
Entertainment editor Emmie Velarde. —INQUIRER FILE PHOTO

Eddie Garcia, the legendary actor-director revered in the entertainment industry for the versatility and professionalism he had unfalteringly exemplified in a career spanning over 70 years, died yesterday at Makati Medical Center. He was 90.

The family’s spokesperson, Dr. Tony Rebosa, and director-screenwriter and family friend Bibeth Orteza confirmed the death of Garcia after 12 days in deep coma. No other details were disclosed as of press time.

Garcia was one of show biz’s most prolific and hardworking actors, with 653 acting credits (for both television and movies) and 37 directing credits to his name. His tally at the Filipino Academy of Movie Arts and Sciences Awards (Famas), in particular, is unmatched: six best actor and six best supporting actor wins, as well as hall of fame status in both categories.

On Tuesday, two days before his death, he was named best actor at the 42 Urian Awards for his performance in “ML”—one of the final movies he did.

His achievements, however, weren’t limited to his performances in front of the camera—he was just as formidable behind it. His directorial debut was the 1961 film “Karugtong ng Kahapon,” which was headlined by Rita Gomez, Ric Rodrigo and his “Siete” costar Mario Montenegro.

As a director, he was a Famas hall-of-famer with three victories—the most notable of which was for the 1986 domestic melodrama “Magdusa Ka,” which starred Dina Bonnevie and Christopher de Leon.

In 1978, he helmed the acclaimed drama “Atsay,” which won for “Superstar” Nora Aunor the historic “best performer” award (no best actor or actress trophy was handed out) at the Metro Manila Film Festival. He was also behind five of Sharon Cuneta’s first six movies, starting with the teenybopper hit “P.S. I Love You” in 1981.

Garcia and his family used to live in New Manila, not too far from the storied studios of Sampaguita Pictures. Little did he know that he would end up being one of the movie company’s contract stars for 12 years, under the producer and starmaker, Dr. Jose Perez.

Because of his imposing screen presence, mestizo good looks and proficiency in Spanish, he was often cast as a villain in many of his early projects. “I always played the guardia civil with the thin mustache,” Garcia recalled in a 2012 interview with Inquirer Entertainment.

But he refused to be pigeonholed as local cinema’s sleek-looking and slick-talking cliché of a contravida. As the years wore on, he steadily and dutifully expanded his body of work beyond his initial image.

He dabbled in drama, comedy, action, fantasy and everything in between. He was a wisecracking everyman, a jaded convict, a closeted gay man, a screaming cross-dresser and a fearsome general who bellowed orders with a transatlantic English accent.

And in his numerous sex-laden, action-comedy outings, he played the suave, cheeky ladies’ man to the hilt—the persona many people readily associate with his moniker, “Manoy.”

While a slew of blockbuster potboilers comprise a good chunk of his filmography, he also starred in some of the country’s most crucial cinematic triumphs, such as “Tubog sa Ginto” (1970), “Pagdating sa Dulo” (1971), “Tinimbang Ka Ngunit Kulang (1974) and “Ganito Kami Noon Paano Kayo Ngayon” (1976).

Garcia did one movie after another, and, along the way, picked up trophies for every fine performance he turned in. His acting talent has been recognized by just about every major award-giving body.

The show biz stalwart was born on May 2, 1929, to Antonio Garcia and Vicente Verchez in Sorsogon province, where he spent his childhood.

He dreamed of becoming a soldier. And so in 1946, at the age of 17, he served as a sergeant in the military police of the Philippine Scouts—an organization under the US Army—in Okinawa, Japan until its disbandment in December 1948.

He originally intended to rejoin the US Army, but the following year, one of his friends, George Sanderson, persuaded him to audition for “Siete Infantes de Lara”—a swashbuckler film by the late National Artist Manuel Conde. They both made it, along with five other hopefuls.

Before long, Garcia was writing a letter to inform his commanding officer that he would no longer be reenlisting. He had decided to become an actor. And it was, in a way, a serendipitous twist, because otherwise—as he so often presumed—he would have long been a casualty statistic of either the Korean War or the Vietnam War.

“Around 4:53 p.m., I got a text message from Tito Eddie’s longtime partner, Lilibeth Romero. She said, ‘Eddie has just left us.’ I then talked to her. She was crying,” Orteza told the Inquirer over the phone. “The family’s prayer was for him to go in peace.”

“Lilibeth knows that Tito Eddie is now in peace and that there’s no more pain,” Rebosa told the Inquirer in a text message.

A medical bulletin from the hospital released yesterday said it was joining “the entire Filipino community in praying for the soul” of the late artist “and his dearly beloved family and friends.”

According to Orteza, Garcia’s condition didn’t get “any worse or better” since he slipped into a coma on June 8, after sustaining a cervical or neck fracture in a freak accident during a taping in Tondo, Manila, for an upcoming GMA 7 drama series.

A video of the incident that went viral online showed the actor apparently tripping on a cable as he was entering the frame. This caused him to stagger, fall face first onto the ground, and break his C1 and C2 vertebrae, which connect the head to the spine.

Garcia was first rushed to  Mary Johnston Hospital in Manila—where he was reportedly pronounced dead on arrival before being revived—and then transferred to Makati Medical Center last June 9. There he remained in “critical condition” and dependent on a ventilator to breathe and medication to regulate his blood pressure until his death.

In the Glasgow Coma Scale, which assesses a person’s level of consciousness, the actor registered a score of 3—the lowest possible score, according to Rebosa. “Only a miracle could have happened,” he said.