What Mon Confiado discovered about Mindanao 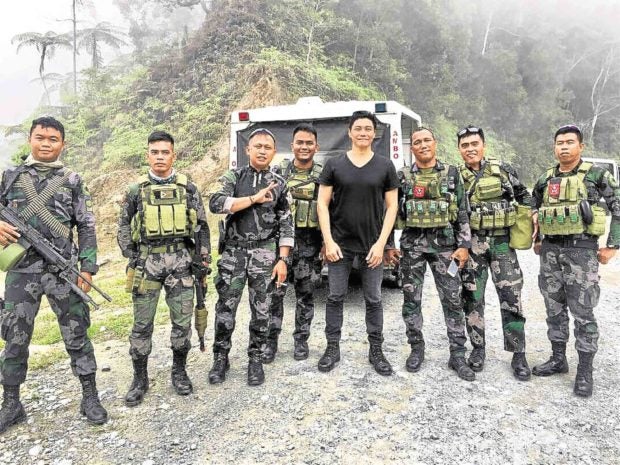 Actor Mon Confiado has been known for making drastic physical changes, like shedding weight or shaving his head, before assuming a character, be it for TV or for the big screen.

This time, Mon said he has been frequenting war-torn places in Mindanao “to have the feel of how life is actually like there,” he told the Inquirer.

Mon is researching for the film he is currently making with award-winning director Brillante Mendoza, where he plays a team leader of a group of Special Action Force (SAF) agents.

“I’ve been going to Zamboanga to meet real-life SAF agents who are based there. It’s part of my immersion,” he said. “I’ve also been to General Santos City, Iligan and Marawi. I would ride the bus from one city to another and pass through provinces that are known to be at war.”

The actor added, with his face becoming serious all of a sudden: “I admit that I am not that ‘protected’ when I go there, but I still do it so I’d have the feel of the real situation there. Surprisingly, Mindanao is not as chaotic as it is pictured to be in the news.”

Asked what he realized during his visits to these provinces in Mindanao, Mon replied: “That these places are beautiful in their own unique way. Sayang talaga! If you say Mindanao, the first impression is that the place is chaotic and dangerous. While this is true in some areas—it’s not something that the media simply invented—life is normal in most places.”

The film, according to Mon, features an all-star cast. It includes Piolo Pascual, Cesar Montano, Marvin Agustin, Epy Quizon, Rocco Nacino, Joem Bascon, Kiko Matos and Felix Roco, to name a few. “I get starstruck whenever I see famous faces on the set,” the actor confessed. “And it’s not just about SAF. It’s also the story of a Muslim family and the Mindanaoan culture.”

Mon said he was also excited about being part of another action project, the ABS-CBN produced “Take Life,” starring Gerald Anderson and under the direction of Richard Somes.

“I play a scout ranger here,” he beamed. “This is hard action. It’s rare that this genre is featured on TV so this really excites me. Plus, maangas na direktor si Somes! I expect so much from him and from this project.”

He added that the series also features Carlo Aquino, Jerome Ponce, Vin Abrenica and Nash Aguas, among others.

“I don’t know why it’s titled as such. I just know that ‘take life’ is [part of] military jargon,” Mon said.