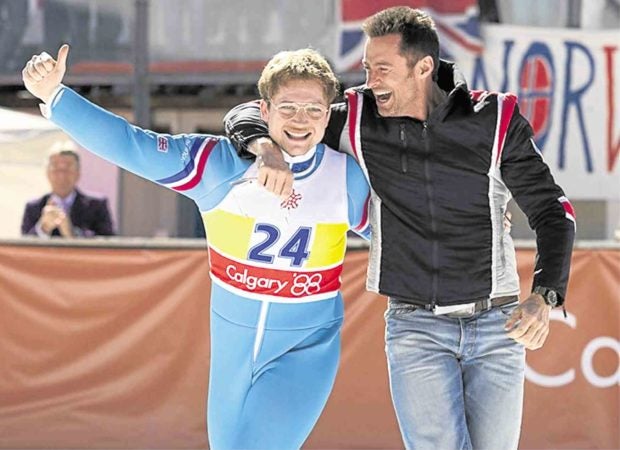 Taron Egerton (left) and Hugh Jackman in “Eddie the Eagle”

It was a sweet, long-anticipated reunion for “Rocketman” actor Taron Egerton and “X-Men” star Hugh Jackman, who costarred in a film a few years ago. But it wasn’t for another movie, Egerton recently announced on Instagram.

“Four years ago, whilst filming ‘Eddie the Eagle,’ [Hugh Jackman] said to me, ‘I’m doing a touring a show in a couple of years. Will you come out and do a number?’ I said yes, thinking he would forget. He didn’t,” said the Welsh actor in the caption for two posts of him performing onstage in London on June 6.

His Aussie pal is visiting the United States next as part of a world tour. In his concerts, Jackman performs songs from “The Greatest Showman,” “Les Misérables,” “The Boy From Oz” and other ditties.

Addressing his close friend, Egerton said, “Hugh, you are one in a million. Your show tonight was extraordinary. Your taste, your humility, your generosity and your warmth … That was one of the most inspiring, exhilarating and extraordinary performances I have ever seen.”

The grateful Egerton, who also sings in the Elton John biopic “Rocketman,” added, “Never did I dream that I would get the chance to sing in front of 19,000 people at the O2 arena. And thank you [Elton John] and [Bernie Taupin] for letting me sing ‘Your Song.’”

The 29-year-old concluded, “Hugh. I am walking on air. Thank you, you wonderful man.” —OLIVER PULUMBARIT