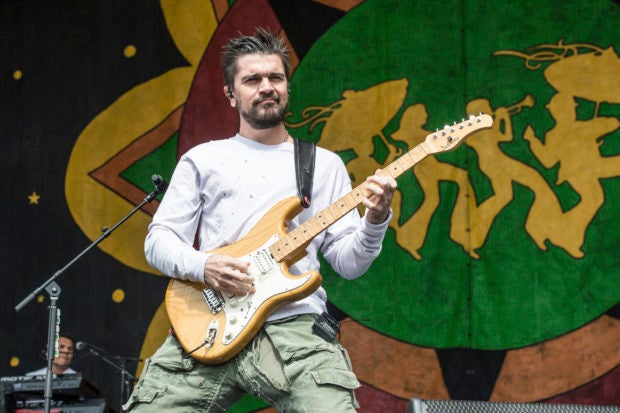 In this May 5, 2018 file photo, Juanes performs at the New Orleans Jazz and Heritage Festival in New Orleans. Juanes has been named 2019 Latin Recording Academy Person of the Year. The academy will honor the 22-time Latin Grammy Award winner and two-time Grammy Award winner on Nov. 13, 2019 at the MGM Grand Convention Center in Las Vegas, on the eve of the Latin Grammys. Image: Invision/Amy Harris via AP

He has sung for previous award honorees and this year he will be the recipient. Colombian rocker-activist Juanes has been named the 2019 Latin Recording Academy Person of the Year.

“I am eternally grateful with life and with music and obviously with the academy, because they have had a lot to do with the projection of my international career,” the 23-time Latin Grammy Award winner and two-time Grammy winner told The Associated Press on Wednesday. “To be there along with all the people that are in such a privileged place is truly an honor.”

Juanes will be recognized for his creative art, humanitarian efforts, support of emerging artists and philanthropic contributions through his Mi Sangre Foundation and his work as co-founder of Paz Sin Fronteras, the academy said Thursday.

“Juanes is young, but legendary, an artist who has inspired us through his amazing music for many years and — while doing so — he vigorously campaigned for political, social and positive change around the world,” said Gabriel Abaroa Jr., president and CEO of the Latin Recording Academy, in a statement.

Juanes will be honored Nov. 13 at the MGM Grand Convention Center in Las Vegas on the eve of the 20th Latin Grammys. Many Latin stars will be there to perform some of his hits, which include “A Dios le Pido”, ”Fotografia”, ”La Camisa Negra” and “Me Enamora”.

Juanes spoke to the AP from his native Medellin, where he was shooting music videos of upcoming singles. The songs, along with the recently released “Querer Mejor” featuring Alessia Cara, will be included in his next record.

“It’s practically done,” he said of the album, which he plans to release later this year or in early 2020. “I still need to finish some details in a few songs.”

He has a series of concerts in Europe this summer and he was invited by the Rolling Stones to help the band close its North American tour in Miami on Aug. 31.

Juanes is one of Latin America’s most influential artists. He made his debut in 2000 with “Fijate bien”. Since then, he’s sold over 20 million copies of his seven studio records and his live album “MTV Unplugged”.

He has used his voice in support of peace and social justice, either through his music or his foundation, which he established in 2006 to help victims of anti-personnel mines in Colombia, and initiatives such as the 2008 “Paz Sin Fronteras” (Peace without Borders) concert in Cuba.